It has never been easy being a gay or lesbian in most countries, but homophobia has scaled new heights in Uganda, where the country’s legislature may be acting soon on a bill which calls for the infliction of a sentence of imprisonment for life for the mere offence of homosexual orientation or gender identity.  The bill also stipulates capital punishment, ‘death by hanging’, on conviction for ‘aggravated homosexuality’, which purports to describe the conduct of homosexuals who have sex with more than one person, or sex more than once with the same person, as well as those who knowingly engage in sexual conduct despite being HIV-positive.  The Anti-Homosexuality Bill further prescribes a term of seven years in prison for anyone who ‘aids, abets, counsels, or procures another to engage in acts of homosexuality’, a measure that would, to take one common instance, cover landlords who knowingly rent out their premises to homosexuals, and a term of three years for those who, while in a position of ‘religious, political, economic, or social authority’, fail to report anyone violating the act.  The Speaker of the Ugandan Parliament, Rebecca Kadaga, eager to bestow ‘a Christmas gift’ on a beleaguered community, had reportedly promised the bill’s passage before the end of the year.  However, Parliament went into recess before the vote could take place, though Ms. Kadaga has vowed that the vote will take place in February.

A nearly identical bill was tabled before the Uganda Parliament without success in 2009, shortly after ethnic riots had engulfed Kampala; and observers of politics in Africa suggest that simmering political dissent has similarly precipitated the present re-introduction of the bill.  But the intervening three years have unfortunately not been uneventful for Uganda’s gay and lesbian community. The 19 April 2009 edition of the Ugandan tabloid, The Red Pepper, carried out a promise, first made in a 2007 article called ‘Homo Terror’, to name and shame the country’s ‘top homos’.  ‘This is a killer dossier’, the article states, ‘a heat-pounding and sensational masterpiece that largely exposes Uganda’s shameless men and unabashed women that have deliberately exported the western evils to our dear and sacred society’.  In October 2010, Rolling Stone, a newly founded local journal, published 15 photos of the country’s ‘leading’ homosexuals, all to the accompaniment of a headline reading, ‘Hang Them’, and reported that it would expose another 85 gays and lesbians.  A few months later, David Kato, advocacy officer of the organization Sexual Minorities Uganda and the country’s most prominent gay rights activist, would be found murdered.  His photograph had been published in Rolling Stone. 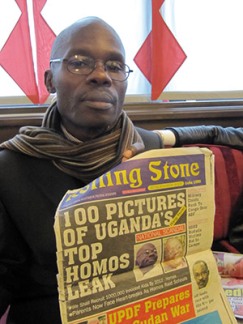 David Kato holding a copy of the October 2010 issue of Rolling Stone.

Just what is it that has brought Uganda to this state of affairs?  Uganda appears to be exhibiting the most severe form of the sexual panic that has gripped other African countries where extreme homophobia is rampant, among them Zimbabwe, Namibia, Swaziland, and Kenya.  In Uganda, reportedly 96% of the people have declared themselves opposed to homosexuality, though it is not clear how such a survey was conducted.  Some human rights activists have argued that in countries where human rights are generally trampled upon, homosexuals would be lucky to receive any protection at all from the state.  The rights of sexual minorities may scarcely be viewed as a priority in countries where democracy has yet to take root and bitter conflict wages over land resources, mineral wealth, ethnic identity, political entitlements, and so on.

While this may be so, why should Uganda, and perhaps other African countries, be more vulnerable to homophobic behavior, whether expressed as state repression or severe social opprobrium, than other conflict-ridden or relatively impoverished countries?  Are notions of masculinity and femininity especially rigid in African societies and is homosexuality consequently an intolerable assault on received notions of sexual conduct?  Does Uganda’s anti-homosexuality bill, with its draconian measures, appear to vindicate those commentators who argue that, by any evaluative scale we can think of, African societies are clearly ‘backward’ and have yet to give minimally adequate recognition to those notions of pluralism, human dignity, and tolerance for the ‘other’ that are expected of nations which seek to be part of ‘the international community’?

The remarks proffered by Ugandan and other African politicians appear to suggest that tolerance for homosexuality is viewed as an imposition of Western values.  Writing a few years ago, President Chiluba of Zambia echoed one widely held view:  ‘Homosexuality is the deepest level of depravity . . .  That homosexuals are free to do as they please in the West does not mean they must be free to do the same here. … The things they do would multiply the rate of spread of AIDS – which was first spotted among American sodomites in the first place . . .’ (Times of Zambia, 19 October 1998).  Namibia’s President Nujoma was likewise of the opinion that ‘most ardent supporters of these perverts [gays] are Europeans who imagine themselves to be the bulwark of civilisation and enlightenment’ (Mail and Guardian, 14 February 1997).  Uganda’s President, Yoweri Museveni, has added another complexion to the debate in suggesting that ‘the African Church is the only one that is still standing against homosexuality.  The Europeans are finished.  If we follow them, we shall end up in Sodom and Gomorrah.’  At a time when it seems difficult for many to imagine that Africa is in the vanguard of anything at all, some Africans may be taking pride in the fact that what was once characterized as ‘the dark continent’ may now be offering a sliver of light to those who believe that the West is slowly being lost to Christianity.

If colonialism’s imprint can never ultimately be ignored in reading Africa’s history, we should not be surprised that a more complicated narrative unfolds if we cast the net wide.  In the colonial view, Africans were purveyors of profligate sexuality, unrestrained in their sexual conduct or mores; on the present view, Africans have gone to the other extreme in aggressively criminalizing homosexuality.  Yet this narrative disguises the critical role played by American-style evangelical Christianity, which has witnessed explosive growth in countries such as Uganda, in promoting a climate of hatred against homosexuals.  The Anti-Homosexuality Bill’s chief sponsor, David Bahati, who flaunts the motto, ‘kill every last gay person’, runs the Ugandan branch of ‘The Family’, a super-secretive American evengelical organization with tentacles around the world and whose members include American senators, highly influential corporate CEOs, and venerated military officials.   Long before the bill was first introduced in 2009, Scott Lively, Paul Cameron, Don Schmierer, and Caleb Lee Brundidge, American evangelists ferociously committed to combating what they call the ‘homosexual agenda’, and exponents of the view that homosexuals can be ‘healed’ and turned straight, had already made Uganda their happy hunting ground.  Indeed, as the United States itself becomes more hospitable to homosexuals, American evangelists will increasingly prey upon the rest of the world.  ‘African savagery’ becomes, yet again, another name for colonialism.