[this is the concluding part of a 4-part series; see also parts i-iii, which are the previous entries on this blog]

In the United States, Mohandas Gandhi has long been the most well recognized figure from India.  In the early 1920s, his American admirer John Haynes Holmes, an influential Unitarian Minister and pacifist whose principled opposition to violence led him to oppose American involvement in both World War I and II, thus exposing him to ridicule from the likes of Theodor Geisel (aka Dr. Seuss)—‘If we want to win’, wrote Dr. Seuss, ‘we’ve got to kill Japs, whether it depresses John Haynes Holmes or not.  We can get palsy-walsy afterward with those that are left’—had already proclaimed Gandhi in a public lecture as the ‘Greatest Man in the World Today’; in another public lecture, he would speak on the ‘World Significance of Mahatma Gandhi’.  It is, of course, the American civil rights movement that again helped to make Gandhi nearly a household name in the United States, though one can also think of such supreme moments in the popular imagination as these lyrics by Cole Porter,

There is an entire history, rather different from the narratives that presently circulate about Gandhi’s “relevance” or “influence”, to be written on how Gandhi has earned India immense cultural capital.  In this respect, Vivekananda presents something of a contrast:  notwithstanding the fact that Vivekananda has had his share of admirers in the West among intellectuals or those, who have always been a small minority, with an abiding interest in ‘Eastern religions’, he remains an almost entirely unknown figure to the wider non-Indian public in Europe and even the United States.  But it is no exaggeration to suggest that among people of Indian origin throughout the diaspora, and especially the United States, Vivekananda is ever so slowly supplanting Gandhi as the supreme representative of their idea of India.  For all of his status as ‘the Father of the Nation’, Gandhi has never been very attractive to those in the diasporic settings who imagine themselves as the vanguard of a resurgent and modern India.  Vivekananda is also less controversial than Gandhi:  since his writings have received much less scrutiny than those of Gandhi, he is also imagined to be a sterner critic of the caste system and more ‘universal’ in his outlook.  One cannot imagine, for instance, the kind of demonstrations around Vivekananda’s statue in Chicago that have taken place around Gandhi’s statues, such as the demonstration in progress over the last few weeks in Cerritos, a neighborhood in the greater Los Angeles metropolitan area, where a disaffected crowd of some a few dozen people have, quite preposterously, been describing Gandhi as ‘a friend of Hitler’ or a ‘child molester’.

There is, as well, a more recent history of the appropriation of Vivekananda by Indian organizations in the United States, a history that amply suggests the hugely iconic status that Vivekananda has come to acquire as a preeminent figure of the notion of a resurgent India.  It is no surprise that he is the patron saint of the Hindu Student Council, which rather modestly and cunningly describes itself as ‘an international youth forum providing opportunities to learn about Hindu heritage, spirituality and culture.’  The HSC is, of course, the youth division of the Vishwa Hindu Parishad, and it has been especially active on American campuses, serving the needs of what are sometimes called ‘heritage students’, or second- and even third-generation Indian Americans, who are keen to learn about Hinduism, ancient India, the modernity of Hinduism, and the affronts to Hindus in countries where they are a minority.  The organizational strengths of the HSC can reasonably be surmised from the fact that in 1993, on the centenary of Vivekananda’s address to the World Parliament of Religions, it held a ‘Vision 2000 Global Youth Conference’ attended by 2000 Hindu students from the US, India, and nearly 20 other foreign countries.

A Stanford HSC flyer announces an event celebrating Vivekananda in 2006.  The flyer claims that “Vivekananda is the modern face of Hinduism.”

Vivekananda is the one figure from the relatively recent Indian past who is most admired in HSC circles as someone who not only spoke for the youth of India but unabashedly suggested that India was positioned to achieve conquest over the world with its rich spiritual inheritance.   It is Vivekananda who, from the standpoint of the Vishwa Hindu Parishad and the Hindu Students Council, successfully transformed Hinduism from an inward-looking faith to the global religion that it had once aspired to be as it spread through Thailand, Java, Bali, and Indochina.  The Hindu Student Council’s ‘Global Dharma Conference’, held at Edison, New Jersey, in 2003, was thus not only a tribute to Vivekananda’s conception of Hinduism as a global religion but an affirmation of Hinduism’s capacity to organize its devotees and take its place alongside other world religions.  The Hindu American Foundation, an organization of relatively recent vintage set up by young Indian American professionals who have been aggressive in advertising their grievances as the upholders of a faith which they claim has little visibility and respect in the US, just as they proselytize about Hinduism’s uniquely tolerant outlook towards other faiths, has been similarly enthusiastic in pushing forward Vivekananda as the ultimate icon of Hinduism’s ecumenism and uniquely spiritual dispensation.  The Foundation’s 5th Annual ‘Next Generation’ essay contest encourages young Indian American Hindus to reflect on the teachings of Vivekananda on the occasion of his 150th birth anniversary, and sets them the task of commenting on a quote from Vivekananda keeping in mind that, to quote from a press release from the Foundation, ‘In a mere five word greeting of “Brothers and sisters of America,” he [Vivekananda] relayed Hinduism’s ancient teaching of Vasudhaiva Kutumbakam, inspiring so many in the audience and countless other Americans to live up to the dharmic understanding of pluralism and mutual respect. His teachings, like Hinduism, continue to stand the test of time and serve as an inspiration to Hindus and non-Hindus alike.’

‘This is the story of a phenomenon.’  Thus Christopher Isherwood commenced his elegant even mesmerizing biography, Ramakrishna and His Disciples.  Isherwood tells a great many stories—and tempts me to conclude with one of the many stories, largely apocryphal, that have now become part of the legend that has grown up around Vivekananda and his legacy in the United States.  In the 1980s, as a graduate student at the University of Chicago with a certain attraction to Sri Ramakrishna, I became a frequent visitor to the Vivekananda Center in Hyde Park.  In time I came to find out that, under the leadership of Swami Bhasyananda, land was acquired in 1968 in the township of Ganges, Michigan, and the Vivekananda Monastery and Retreat was duly established in the midst of a wonderfully bucolic setting.  Upon inquiring how Ganges had acquired its name, I was told by the residents of the Monastery that the town was founded by an early follower of Vivekananda; others mentioned to me that the disciple in question was the Governor of Michigan, and that in honor of the Indian swami he conferred Indian names on two towns, the other being Nirvana.   At that time I ceased my probe into this matter, inclined to accept the view that the story was worthy to be told to others, whatever its veracity.  In recent years, as Vivekananda’s place in the diasporic imaginary has grown tremendously, I thought it worthwhile to investigate this story further and found not a scrap of evidence to corroborate the view held by members of the Vivekananda Monastery.  Thus Walter Romig, in his reasonably authoritative Michigan Place Names, states that Ganges was settled in 1838, and so ‘named by Dr. Joseph Coates, a member of the legislature from Otsego, after the holy river of India, for reasons unknown’; of Nirvana, he says that it is ‘Buddhist for highest heaven’, and acquired its name from the great admiration that Darwin Knight, the town’s first postmaster, bore for ‘Oriental religions’.  But will this matter at all to Vivekananda’s followers and disciples in America and around the world?  Should it matter at all?  What could be more fun, after all, than to arrive in Nirvana, and then drop a few postcards to friends and family members announcing one’s arrival in (Vivekananda’s) Nirvana? 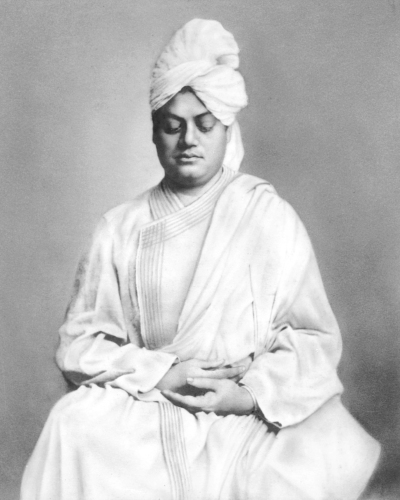 [The four parts were together first published, though in a much abbreviated form, in OUTLOOK, Web edition]

For the Portuguese translation of this article by Artur Weber and Adelina Domingos, see:  https://www.homeyou.com/~edu/resurgente-india-brilhante

This article is also available in a Spanish translation by Laura Mancini:

The entire series of four parts has been rendered into Polish by Marek Murawski; for a translation of this part, see:  http://fsu-university.com/czesc-iv-vivekananda-i-wujek-sam-historie-opowiadania-polityka/