India and Pakistan are so close and yet so far apart.   One is tempted into saying that no two countries are so similar, and yet the two countries have gone to war, and have been nearly lured into war, on several occasions.   The distance from Amritsar to Lahore, the two greatest cities of the undivided Punjab, is a mere 53 kilometres.  A super-fast train, of the kind found in Japan, China, and in most of western Europe, would have traversed this distance in 10 minutes.  However, approaching the border from either end, travelers must navigate the shoals and eddies of the modern nation-state system at Wagah.  On the Indian side, the last station is Attari; from here, it is a mere 3 kilometres to Wagah; and, in between, one might say, is “no man’s land”, where the “formalities” that are necessary at border crossings are transacted.

The distance from Wagah to Lahore is 29 kilometres, and a tad less is the distance from Wagah to Amritsar.  But this is one crossing that is not meant to be navigated at will, and certainly not in a vehicle of one’s choosing.  One might cross on foot, provided one had a visa; more commonly, the crossing is attempted on the Samjhauta [Agreement] Express, as the train that ferries Pakistanis and Indians across the border is optimistically if not gallantly named.   But supposing one was looking to take a journey from Amritsar to Lahore in one’s own car, as one might from, say, Seattle (Washington State, USA) to Vancouver (British Columbia, Canada).   Google Maps tells me that on Interstate 5, I can cover the distance of 147 miles in less than 3 hours.  However, when I put in Amritsar and Lahore into Google Maps and sought directions, I was advised, as would anyone else who cared to undertake such an exercise, that the distance between the two cities by car is 5,385 kilometres and would ordinarily be covered in 110 hours!  If, like most drivers from South Asia, one cannot be even remotely bothered by posted speed limits, one might perhaps knock off a few hours, though I suspect that the continuous transgression of such limits, in certain parts of Tibet or the PRC, may pose some hazards.  Why, however, mention Tibet at all?   The stated route takes one not due west, but rather south to New Delhi (as if in tacit acknowledgement of the fact that no such trip would be possible without the mandarins that staff the corridors of power at the Secretariat), and from there southeast to Uttar Pradesh and thence to Nepal, and then west and largely north through Tibet and China to just east of the eastern border of Tajikistan before one makes one’s descent through Pakistan-Occupied Kashmir (POK, though, naturally, it is known as Azad Kashmir in Pakistan), Islamabad, and finally through Pakistan’s province of Punjab to Lahore.  What else need one say about the impossible distance that intimacy often creates? 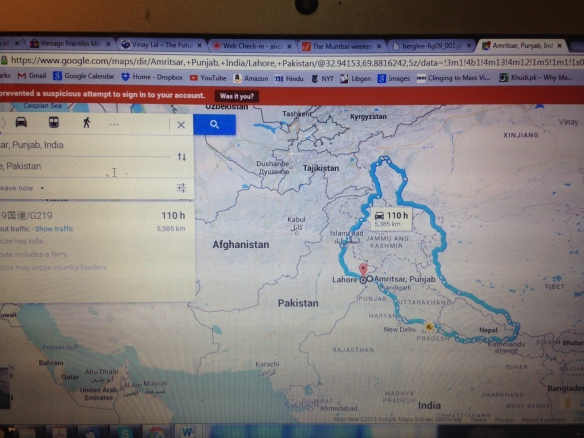 It is characteristic of the peculiar relationship into which Pakistan and India are now bound that Wagah chiefly occupies a place in popular lore as the site of one of the most unusual rituals of the nation-state system.  Tourists flock in numbers each evening to see, shortly before sunset, the Beating Retreat Ceremony:  across the divide, the two countries lower their flags and armed soldiers stage a highly orchestrated set of maneuvers.  For the ethnographer of nationalism, Wagah is as rich a site as any to comprehend the semiotics and rituals of the modern nation-state and the mobilization of symbols and sentiments in creating a nationalist sensibility.  Pomp and ceremony have long been handmaidens to nation-state exhibitionism; and there is, of course, no nation-state without a national flag.  What is most striking about the spectacle is that the audience, at either end of the border, are permitted the sight of the other but no more, the thought of intimacy but nothing that would occasion its realization.

Every Indian visitor to Pakistan has recounted the warmth with which he or she was received in that country; Pakistan feels very much like ‘home’.  Much the same can be said of Pakistani visitors to north India.  It is also apparent that, in some fundamental respects, the two countries, notwithstanding their shared heritage, have moved in different directions; nevertheless, the sense of what is common to both is overwhelming.  Why, then, the distance?  Many people are inclined to argue that the animosity that exists between India and Pakistan reflects not the sentiments of the people of the two countries but rather is an attribute of the logic of the nation-state system and the zero-sum politics that shapes the foreign policy of each country.  This is unquestionably true; and, similarly, there can be no gainsaying the fact that what NGOs describe as people-to-people contacts are likely to make a much greater difference in facilitating peace than ministerial-level dialogues, meetings between foreign secretaries and other bureaucrats, and yet more state-sanctioned conferences.

Still, once one has conceded that enhanced civil society interactions are the sine qua non of a peace between Pakistan and India, the nagging feeling persists that there is something a bit more  inexplicable which characterizes the relationship between India and Pakistan, producing distance when is there is so much intimacy.  In a number of his writings, Freud noted the tendency of people who are very close to each other to exaggerate what divided them:  he referred to this phenomenon as the narcissism of minor differences, sometimes substituting “small” for “minor”.  His magisterial essay of 1930, Civilization and Its Discontents, offers a commentary on this dynamic with an observation about “communities with adjoining territories, and related to each other in other ways as well, who are engaged in constant feuds and in ridiculing each other.”  Elsewhere he had occasion to comment, “Every time two families become connected by a marriage, each of them thinks itself superior to or of better birth than the other.  Of two neighboring towns each is the other’s most jealous rival; every little canton looks down upon the others with contempt.”  The Scots and the English, Shias and Sunnis, Serbs and Croats, Hutus and Tutsis:  to these pairs, and to the loveless rivalries that beset English football clubs, one might add Pakistan and India.  It may, perhaps, require more than the display of brotherly and sisterly sentiments to bring Pakistan and India out of the curve of enmity.