Recent events at Jawaharlal Nehru University (JNU), India’s premier university, are an ominous sign of the Modi Government’s relentless assault upon democracy.  The arrest, around ten days ago, of Kanhaiya Kumar, a graduate student at JNU who serves as the JNU Students Union President, on charges of sedition and criminal conspiracy under Sec. 124A of the Indian Penal Code has been roundly condemned all over India.  If convicted under this colonial-era legislation, Kumar could in principle receive a sentence of life imprisonment.  The campus of this venerable institution, whose alumni feature prominently in the political, social, and intellectual life of the country, was turned for several days into a fortress with armed police at every corner.  Widespread demonstrations by faculty and students at the police crackdown led to suspension of classes and campus life remains seriously disrupted at this time.

JNUSU President, Kanhaiya Kumar, Being Arrested by the Delhi Police.

It is not the first time that Indian democracy has been put under severe stress, but this is surely one of the gravest tests to which the country is being subjected since an emergency was imposed by then Prime Minister Mrs. Indira Gandhi for 21 months commencing in mid-1975.  The present chain of events was set in motion when some students at JNU decided to hold a protest meeting on February 9 to mark the third anniversary of the hanging of Afzal Guru, a Kashmiri militant who was founded guilty of the attack upon the Indian Parliament in 2001 and handed a death sentence by Indian courts. Afzal Guru’s conviction was always under a cloud of suspicion.  In its 2003 judgment, the Delhi High Court implied that Guru had been tried by the court of popular opinion and found guilty, and that the court was obligated to follow “the collective conscience of the society.” The JNU students are not the only ones who have termed the hanging of Afzal Guru, carried out in Delhi’s Tihar Jail in secret, a “judicial killing”. 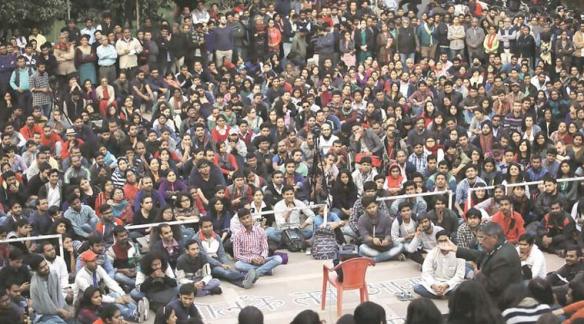 Sitting in Dharna: Protests by JNU students on February 18.

At JNU’s student-organized protest, however, a number of participants were also heard chanting slogans calling for the destruction and fragmentation of India.  The campus, as is widely known, is a hotbed of politics; in recent elections for the Student Union’s post of President, the candidate representing the student organization linked to the ruling Bharatiya Janata Party (BJP), which flaunts its Hindu nationalist credentials, lost to the left-affiliated student organization to which Kanhaiya Kumar belongs.  Acting upon a complaint that the JNU campus was being used to stage “anti-national” activities, the Home Minister, Rajnath Singh, issued a statement warning that “if anyone raises anti-India slogans, tries to raise questions on the country’s integrity, they will not be spared.  Strongest possible action will be taken against them.”  Within hours of the Home Minister’s pronouncement, the Delhi Police had swung into action and taken Kumar into custody.

Over-reach and lunacy, strong as these words are, do not begin to describe the tyranny that is being unleashed by a government that fears democracy.  The law on “sedition” was framed by the colonial state to repress and silence Indian nationalists, and none other than Mohandas Gandhi was put on trial in 1922 on the charge of “bringing or attempting to bring into hatred or contempt or exciting or attempting to excite disaffection towards His Majesty’s Government by law in British India.”  Sec. 124A, as Gandhi noted ironically, was the prince of the legislative masterstrokes by which the British government sought to contain Indian nationalism.  The state in independent India has trotted out this obscene and obsolete piece of legislation from time to time to punish dissenters.  However, as the Indian Supreme Court has noted on more than one occasion, speech cannot be deemed seditious unless it is accompanied by violence, or incitement to violence.

Kanhaiya Kumar has denied that he was chanting the incendiary slogans calling for India’s destruction and thus far those engaging in sloganeering have not been identified.  Indeed, it is now reasonably certain that the videos which purport to capture the sloganeering were themselves doctored.  Be that as it may, what is most germane about Kanhiaya Kumar is that he has always openly stated that calls for India’s ruin and the fragmentation of the country must be unequivocally repudiated.  Kumar has also been captured on video making a fiery yet eloquent extempore speech where he swears by India’s constitution and denounces the attempt by the Hindu nationalists in power to impose their worldview upon all Indians.

The oratory of Kanhaiya Kumar

His speech, a striking display of rhetorical skills, is a ringing critique of upper-caste domination and the oppression of the poor.  It is his unsparing indictment of the present government, rather than any so-called “anti-national” activities, that has brought down the power of the state upon him.  It is a reflection of the pathetic composition of this government that Smriti Irani, the Minister of Human Resource Development, a former actress who has barely finished high school, has under her charge the subject of education.  Since the government is incapable of an intellectual or reasoned response to criticism, it wields the power of the stick.  That has been the timeless way of bullies.

There is but no question that a battle is looming large between an inept and tyrannical government and those elements within civil society who are deeply committed to the idea of India as an ecumenical democracy that has a long way to go in enabling every Indian to lead an unimpeded life of dignity.  It is also worthy of note that those who are describing JNU as a bastion of Maoist politics, or a breeding ground for terrorists, and who have now branded a young man from one of India’s poorest regions as a sedition-monger, hail from political organizations that contributed not an iota to India’s own freedom struggle.  Many of the present government’s highest-level ministers and functionaries are lifelong members of the Rashtriya Swayamsevak Singh (RSS), a paramilitary organization staunchly wedded to the idea of India as a Hindu state.  The RSS was implicated in the conspiracy that led to the assassination of Gandhi on 30 January 1948 and the organization was at once banned.  It is their narrow, provincial, and bigoted conception of Indian society that Kumar has contested and his implicit call to join the struggle must be heeded if Indian democracy is not only to survive but thrive.

41 thoughts on “*India and the Fear of Democracy”