(Being a Cornucopia of Facts, Opinions, Commentary, Satire, Scholarly Writing, Poetry, and Vignettes, But Mainly Facts and no Ressentiment)

The President-elect, Donald J. Trump, today appeared before a large pool of reporters for his first press conference since his victory speech in the wee hours of the morning of November 9th.  Mr. Trump seemed to be in a radiant mood and there was much expectation that he would address looming questions about the rockiness of the transition and his choices for top cabinet positions. The President-elect knows that he is in the eye of the storm, but while acknowledging that much of the world was uneasy both about some of the choices that he had made thus far and about others who were clearly in the running for some of the highest offices of the land, Mr. Trump said that he wished to turn his attention to a more pressing matter.

Throughout the blistering campaign, Mr. Trump noted, he had been the subject of many unfair attacks.  Much had been said about him being a racist, sexist, anti-Muslim, anti-immigrant, and so on.  Total lies, all lies, lies, lies coming out of—wherever.  Nothing had hurt him as much, Mr. Trump complained, as being accused of being a sexual assaultist.  Yes, he had said things on the video about kissing any woman who struck his fancy, and grabbing women by the pussy.  He had explained, however, that this was just locker-room talk, men being men.  The problem with the elites was they didn’t spend much in locker rooms and places where real men gather.  The fact that he had been elected to the most powerful office in the world was as convincing a demonstration as any that women, who had given him more votes than they had to Mrs. Clinton, didn’t care much for what he had said and recognized that men were entitled to be men.  The women who had voted for him didn’t want men to be pussies and they recognized a man when they saw one.

When the Independent Press (IP) reporter, Vincent Salaam Lal, asked Mr. Trump whether he had anything really new to add to this somewhat worn-out subject, the President-elect got excited and replied that he had called this press conference to furnish a fuller account of himself. Once he had done so, he did not doubt that everyone would recognize him for the gem that he is. He had many times said openly that he found women beautiful, women were just such beautiful creatures, they’re mothers of the human race and of my children, now what would we do without women.  Hadn’t he said, and yet no one took him seriously, except the huge number of women who cast their lot with him, that no one, and I mean no one, loves women as much as I do.  He had described them as “phenomenal” on more than one occasion.  Jeb Bush, in one of the debates, had said that he wasn’t sure that the government could cough up billions of dollars for women’s health.  Now wasn’t that deplorable?  And what had he, Mr. Trump, said in response: “When you’re negative on women’s health, you can forget about it.  I’m the exact opposite. I cherish women. I want to help women. I’m going to be able to do things for women that no other candidate would be able to do, and it’s very important to me.”  Those who claimed that he had called women “fat pigs, dogs, slobs and disgusting animals”—well, they were just being “nasty”.  Lies, all lies, complete lies, Mr. Trump added with some vehemence.

Mr. Trump noted that he still had an ace up his sleeve.  Nothing demonstrated his affection for women, beautiful women whom he cherished, as much as his chivalry.  The fact was that he had done nothing to women that they hadn’t done to themselves, but out of his unrivalled respect for women he had decided to forgo this line of defense at the time of the campaign.  Take, for instance, the question of grabbing ‘em by the pussy.  Mr. Trump noted that the inspiration for behaving thus had come to him one evening as he lay in his gold-framed bed and looked at a wonderful painting by some Italian artist called Modigliani hanging on the opposite wall.  At Mr. Trump’s sign, one of his executive assistants then projected this painting: 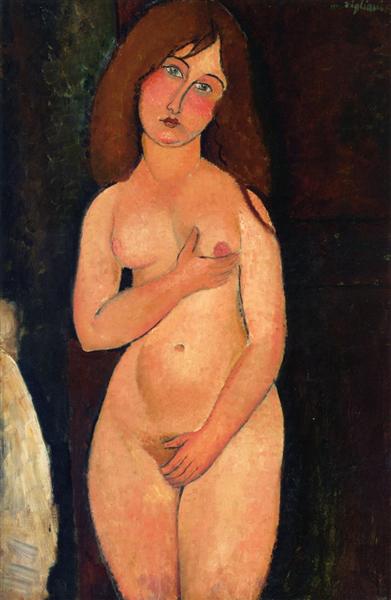 Now, look here, what is this woman doing? She’s grabbing herself by the pussy, Mr. Trump claimed, and what’s more, she’s pinching her own breast.  Now that’s what one does.  That’s what any reasonable person, man or woman, would do.  This is why this artist, whatever his name is, is worth so much.  He knew the truth, he recognized the truth for what it is, and he painted it. His paintings sell for millions, many millions, and I’m one of those few who can afford to buy them.  Isn’t that beautiful?  But I want to know why everyone was beating up on me? If they had to beat up on anyone, it should have been the artist.