The New York Times in an editorial piece published on July 1, under the title “Mr. Trump, Melting Under Criticism,” has weighed in on Mr. Trump’s Twitter War, most recently on the MSNBC co-hosts Joe Scarborough and (especially) Mika Brzezinski, with the observation that the President of the United States “does not appear to realize that he is embarrassing himself” (emphasis added).  This is in reference, of course, to his tweet about “low I.Q. crazy Mika” and “Psycho Joe”, and his characterization of Ms. Brzezinski as “bleeding badly from a face-lift.” 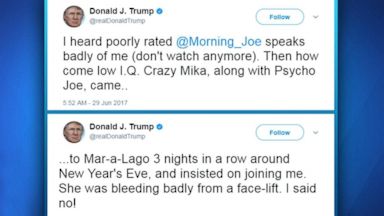 The ‘venerable’ Times laments, as do many other media outlets and perhaps considerable segments of the American population, the “creepy misogyny”, cyberbullying, and the pathetic boasts of sexual prowess that have informed the conduct of Mr. Trump since before he assumed office and which have shown no signs of diminishing since he was installed in the White House.  However, the New York Times ends the piece with a wholly predictable piece of humbug, which is an illustration if nothing else of the limits of this newspaper’s imagination.  Inquiring if the “etiquette of professional wrestling and reality television truly pass as acceptable for the Oval Office”, the paper’s editors affirms that “the breadth and depth of bipartisan repugnance for this president’s insults suggests, thankfully, that the answer may prove to be no.”

The phrase “bipartisan repugnance” is itself a species of charlatanism, assuming as it does that “bipartisanship” is the gold standard from which the present generation of American politicians have regrettably departed.  The democrats have deviated so far over the last several decades from any kind of politics where social equality is at all meaningful that to speak of “bipartisanship” in this vein is to show not an iota of awareness of the fact that the masquerade of a single political party posturing as two is the critical problem in American politics.  But let us leave aside this weighty matter for another one which may suggest why a man charged with sexual harassment and worse by at least fifteen women did not only not have to pay any price for his reprehensible conduct but rather was rewarded by being elected to the highest office in the country.  The import of this may perhaps be understood when we reflect on the fact that the recently exonerated Bill Cosby, whose own sordid saga of gross sexual misconduct has been played out in the press in vivid detail, felt emboldened enough to state that he would go on tour and conduct “town halls” where he would instruct young men on how to avoid accusations of sexual conduct.  Mr. Cosby is nowadays described as a “disgraced comedian”, but evidently he was not disgraced enough, not if he had the temerity to counsel young men on how they might take advantage of women and avoid the risk of accusation.  This last act of the “comedian” would be comic if it were not so repulsive.

Let us return, then, to the sentence on which so much pivots: “He [Trump] does not appear to realize that he is embarrassing himself.”  Feminists are not alone in pointing out that Mr. Trump appears to take special delight in demeaning women, and many will point to the apparent tolerance for such conduct as an indication of the deeply misogynist strands in much of American society.  Women, on this argument, are far from being considered as equal, and it is widely understood that, at least in certain sectors of American society, the denigration of women has no adverse consequences for sexists or misogynists.  All of this may well be true, and the argument of American feminism about the distance that women have yet to travel is all but unimpeachable.  But Mr. Trump is nothing if not an equal opportunity employer:  he has held forth, after all, on Mexicans as rapists, on Muslims as terrorists, on the Chinese as (currency) manipulators, and so on.  Mr. Trump’s contempt for a good portion of humankind does not even remotely rescue him from the charge of misogyny, but his political demeanor suggests that something more is at stake than his contempt for women, ‘losers’, and others whom he so clearly disdains.

Why, to rephrase the question, does Mr. Trump not experience any sense of shame?  If a person is consistently thought, by a good portion of the media and the public, to be a habitual liar, misogynist, bully, sexual assaulter, brutally vindictive, and authoritarian to boot, one might think that at some point such a person could be shamed into doing better or displaying some of those qualities, such as contrition, which round out a person as human.  Seven decades ago, when Japan came under American occupation and American anthropologists were called upon to provide some insights into Japanese character to ease the task of ruling over a defeated but proud ‘alien’ race, Ruth Benedict answered the call with a study, The Chrysanthemum and the Sword (1946), where she distinguished the modern West with its supposed ‘culture of guilt’ from Japan with its ‘culture of shame’.  The precise problems with Benedict’s understanding of Japanese culture are many, among them the presupposition that what may be called the guilt regime of Christianity stands opposed to the notion of social order and civility that characterizes a Confucian-driven society.  Nevertheless, her notion of a ‘culture of shame’ is not without use.  Thus, to take a singularly spectacular example, when the Japanese company Akagi Nyugyo raised the price of its immensely popular ice cream bar from 60 Yen to 70 Yen, or by less than the equivalent of ten cents, the first such raise in 25 years, the chief executives and other employees of the company appeared together in public in a collective display of remorse.  This was an expression of the shame they experienced in, as it were, having to betray the trust the public had reposed in them.  Stories of Japanese executives committing suicide when they have been caught in mismanagement of a company, or profiting from their own mistakes, are legion.

Mr. Trump stands at the very opposite end of this spectrum:  he is a specimen of a man who does not experience any shame at all.  However, what is alarming about American society is that he does not even remotely stand in singular and sinister isolation in this respect, even if the tendency is to cast him as something of an aberration.  The problem runs much deeper:  indeed, I would hazard the thought that the idea of shame is no longer a part of the vocabulary of American public life.  The idea of shame has virtually disappeared from the American lexicon; it is a relic of a pre-modern era.  That is precisely why jail sentences, nominal or otherwise, have no bearing on the future political or public conduct of public figures and celebrities.  After her conviction in 2004 of financial fraud, Martha Stewart did not sink into oblivion; she merely went through a hiatus and by 2012 had assumed the Chairmanship of her namesake company.  The sexting scandals of Anthony Weiner which led to his conviction in 2011 did not preclude him from making a run for the New York mayor’s office in 2013.  It is precisely this utter lack of shame which Donald Trump and Bill Cosby find enabling in their crusading attempts to cast themselves as victims of aggressive and lying women.

Political party affiliations are of no consequence in this state of affairs:  if there is any “bipartisanship” in American public life, it resides in the fact that Democrats and Republicans are equally shameless.  Thus, in the present dispute between Mr. Trump and the “Morning Joe” show co-hosts, it is not each party’s opposition to the other but rather the sheer complementariness of their positions that is strikingly palpable.  The relationship of Joe Scarborough and Mika Brzezinski to Mr. Trump has been nothing if not, in the words of the New York Times, a “roller-coaster” ride.  Scarborough was at one time rather close to Mr. Trump, even a political confidante, and he was briefly even under consideration for the position of Mr. Trump’s running mate.  Mr. Trump’s pointed objection to Joe and Mika as fundamentally hypocritical, considering they spent three evenings at his exclusive private resort, Mar-a-Lago, around New Year’s Eve has received less attention than it deserves.

It is not that Mr. Trump stands exonerated, contrary to what he believes; rather, we have to question whether it was merely lack of judgement on their part, or, as I am suggesting, that Mika & Joe inhabit fundamentally the same amoral universe which has defined Mr. Trump, which made them consort with Mr. Trump months after repeated allegations of egregious sexual misconduct on his part had become part of the record.  It is not that Mr. Trump has changed in the six months since they wined and dined with him; Mr. Trump has not transformed from a gracious and unassuming host to a raging lunatic.  We may, if we wish, put down the strained relationship of this recently-engaged couple to Mr. Trump as something akin to the estrangement of lovers; or we may characterize their relationship as illustrative of what Freud called the narcissism of minor differences.  Beyond all this, I submit, the supposed dispute between these two parties is illustrative of the fact that concepts such as shame have now disappeared from American public life.