I:  An American Consensus on North Korea

(First of three of four parts)

If there is anything that has been established with absolute veracity since the ascendancy of Donald J. Trump to the White House, it is that the American President is a consummate liar.  The man who has been shouting himself hoarse with denunciations of ‘fake news’ is by far the most profligate proponent, initiator, and consumer of fake news.  (He denies being hooked to television, and more particularly to that den of troglodytes known as Fox News, but all the evidence points to the contrary.)  But all this is no news at all, not nearly one year into his presidency.  He has made liars of others as well, which is not a lesser offense and is certainly more ominous in its implications. The Washington Post on October 10th reported that, in the 263 days since he had held office, Trump had advanced 1318 false or misleading claims; that number of “false claims” now most likely stands at 2000, though, considering that Trump has only to open his mouth and out comes a lie, it would make more sense to keep a count of the non-falsehoods that have emanated from him.  Any other exercise would be superfluous.

Senior members of his own party, whose own ideological disposition tends towards the extremely conservative, have castigated him as wholly unreliable and a miniscule few have taken the step of declaring him as unfit for office. Never mind the fact that the Republicans who have denounced Trump—the more diplomatic-minded, perhaps mindful of what is described as Trump’s “base”, describe him as ‘unhinged’ for office—are something like the pieces of sausage, if I may paraphrase the great Austrian wit Karl Krauss, who balk at being described as pigs.  His last Republican predecessor, George W. Bush, had once appeared to most liberals as a nightmare: Barack Obama, we have only to recall, received the Nobel Peace Prize merely for not being Bush.  Given how the winds are blowing, it is not inconceivable that Trump may a few years hence receive the Nobel Peace Prize, merely—no mere mere, this one—for not having initiated the nuclear annihilation of another nation-state.  If that should happen, that will not be fake news, either. 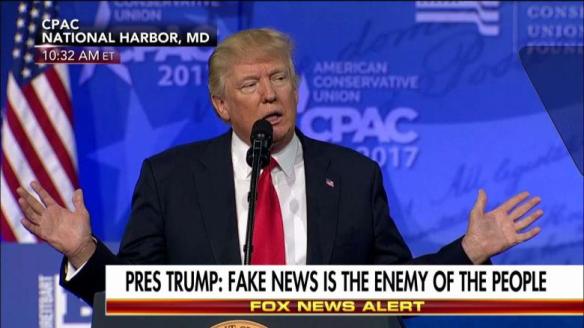 Tragically, some liberals—it is not difficult being a liberal in the United States, even in these rugged times, if one accepts that minimally it only requires that one not be deranged, intellectually imbecilic, and morally bankrupt—are now beginning to think of the 43rd President, who has recently attacked Trump without mentioning him by name as someone who is leading the country into a precipitous decline as a respected world power, as a “decent” man.  They have evidently forgotten, or think it of no consequence, that Bush and his cohorts celebrated bombing Afghanistan, as they would say, into oblivion; if this savagery was not enough, the fiction of “Weapons of Mass Destruction” (WMD) was deployed to enlist “the international community” in an illegal war against Iraq, the consequences of which can be seen in the incessant turmoil into which Iraq and much of the Middle East has been plunged since early 2003 and the birthing of that Frankenstein monster called by various names, among them ISIS, ISIL, and Daesh.

It says something about the United States that the war-mongering George W. Bush has now been rapidly elevated as a voice of moderation and prudence. However, whatever the supposed differences between Bush and Obama, or between the Republican establishment and what is commonly and mistakenly described as its radical “fringe”—which, it must be said unequivocally, is far more than a fringe—comprised of white supremacists, xenophobic nationalists, militarists, and Tea Party ideologues, there are a number of issues on which there is an unanimity of opinion, none as important as the threat that North Korea is purported to represent to the United States.  True, a great many American politicians and commentators have criticized Trump for his intemperate use of language in discussions around North Korea, and some thought his use of Twitter to threaten war against a sovereign state was injudicious. Something as mighty as the annihilation of a nation-state should surely not be promised through a Twitter feed, no?

Why Trump should have been expected to display more restraint in this matter than in any other is something of a puzzle, unless of course one holds to the view that on the matter of North Korea Trump ought to have been more calculating since the stakes—outbreak of nuclear war—are infinitely higher than on the various other matters where Trump has chosen a path of conflict. There is thus a current of feeling that Trump would be better advised to negotiate rather than issue naked threats.  But none of this signals any substantive difference of opinion even among Trump’s critics and detractors about the existential threat that North Korea is thought to pose to the US or world security, or the characterization of North Korea as a wholly “rogue” state run by a bellicose madman. On North Korea, at least, there is an overwhelming American consensus—not about how to ‘handle’ this ‘rogue state’, but rather on the unmitigated evil that this tin-pot nuclear-armed dictatorship singularly poses to the free world.

2 thoughts on “*North Korea and the Threat of Nuclear Annihilation”