On this day, seventy years ago, Mohandas Gandhi was felled by three bullets from a gun fired by Nathuram Godse, a Chitpavan Brahmin who nursed a number of grudges against the man anointed as the “Father of the Nation”.  Most people in India mourned; some cheered.  More than a few held him chiefly responsible for the vivisection of India and declared that he, more than Muhammad Iqbal or Muhammad Ali Jinnah, had played a critical role in birthing Pakistan; in the days before his death, Gandhi had been taunted by some as “The Father of Pakistan”.  Godse held that Gandhi was an effete man whose womanly ways and petulant behavior, which led the old man to fast whenever he could not get his way, had emasculated the country.  Thus, in Godse’s view, Gandhi deserved to die. 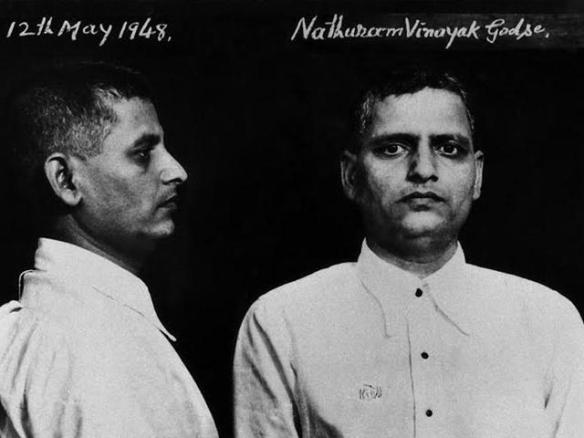 Unlike, however, those who at present rejoice in Gandhi’s death, even as they garland his statues and mouth the customary platitudes about his “continuing relevance”, Godse was quite candid in holding forth that India could never become a powerful nation-state that the rest of the world might envy so long as Gandhi was alive to guide the country’s destinies.  Godse was also genuinely reverential in his feelings towards Gandhi, a part of his story that is little recognized:  the Mahatma loved the nation and had awakened the slumbering masses, so Godse thought, but he had deviated from the path and gone astray.  Gandhi, that inveterate user of trains, had derailed the country.  His murder would be the first step in the yet unnamed project of ghar wapsi:  even as Gandhi was being returned to his Maker, the country would supposedly be returned to its roots.

Freud in Civilization and Its Discontents described the battle within everyone between eros (the instinct to love) and the death wish (thanatos).  While we need not be beholden to Freud’s precise reading of the death wish, it may be said that, in a peculiar way, Gandhi did not mind being killed.  By this I do not merely mean what most who are familiar with Gandhi’s life will at once infer, namely that he often spoke in the last few years of his life, and particularly in the aftermath of the partition killings, of having lost the desire to live.  He had a premonition of his own death; and, yet, he had also said on more than one occasion that he wished to live until he was 125 years old.

I have in mind something quite different.  Though there have been many compelling interpretations of his life, Gandhi has increasingly struck me as someone who felt himself at sea in the world.  Everyone has her or his own Gandhi:  political activists, nudists, vegetarians, environmentalists, prohibitionists, civil resisters, and pacifists are only some among the dozens of constituencies that have claimed him as their own and sometimes even adopted him as their mascot.  It is time for the homeless to claim him as their own, though we should first strive to unravel a few of the meanings of home and dispossession.  We often make a home and dispossess others by our act.  The home that we long for, when realized, suddenly loses all its attractions.  Our home might come to burden or haunt us, creating other forms of dispossession.  Our actual home may well be elsewhere than the home in which we live.  We may be at home in not being at home at all, and the home that we call home may have no relation to the home that is in the heart.  That home with which we draw a boundary to keep out others becomes more than a marker of territory, helping shape conceptions of the outside and the inside, the other and the self, the alien and the familiar. We may, like the reluctant exile, gain a political home and lose our cultural home.  We may have several homes, and yet feel dispossessed; or we may have no home at all, and feel that the world is at our fingertips.

Gandhi’s life offers fleeting impressions of someone who, even as his feet were firmly planted on the ground, was curiously unmoored.  For much the greater part of his adult life, Gandhi was bereft of a family home, sharing not even an extended family home that was overwhelmingly the norm in his lifetime.  He shared his life not merely with Kasturba and their sons but with dozens and often hundreds of inmates in communes and ashrams, and was deeply resented by some members of his family for being insufficiently attentive to them and their needs.  If, for instance, the notion of home implies the idea of a private sphere, Gandhi displayed not merely indifference to the idea of privacy but was inclined to see it as a species of secrecy and thus deception.  It cannot be an accident that, having vowed not to return to Sabarmati Ashram until India had been delivered from the shackles of colonial rule, Gandhi went on the Dandi March and then drifted around, somewhat like a homeless man, for a few years until he settled upon Wardha in central India.  In early April 1936, he set himself up in the desperately poor and mosquito-infested village of Segaon, which then had a population of less than 700.  Segaon had the virtue only of being, it is said, the dead center of India, home to everything and nothing.

Gandhi was beginning to feel homeless in the India that was taking shape even before partition tore apart his country and his heart alike.  He was an early critic of what in post-World War II would begin to be called “development”; but he was also, and this is the greater irony, in view of his role as the chief architect of the Indian independence struggle, never at home with the idea of the nation-state.  No nationalist was less invested in the nation-state that he had helped to forge.  That is one of the measures of his greatness and of his distinct mode of being (at home) in the world.  Gandhi had once appealed to Ambedkar to put aside their differences and work him in the interest of the country, and Ambedkar famously replied, “Mahatmaji, I have no country.”  Little could Ambedkar have known that Gandhi would just become his statues.  We can in any case think of their exchange as the most extraordinary recorded conversation between two homeless men.

[This is a slightly revised version of a piece published in the print and online editions of the Indian Express on 30 January 1948; in the print edition, the piece appears on p. 1; the online version is here: http://indianexpress.com/article/opinion/columns/mahatma-gandhi-jayanti-father-of-the-nation-5044076/]

[The online version of the piece as it appears in the Indian Express of course invites comments from readers.  One reader remarked that, in highlighting the fact that Nathuram was a Chitpavan Brahmin, I was clearly displaying my prejudice against Hindus.  This is not even remotely the case, though the culture of trolling has now made it far too easy for people to engage in slander, cant, and humbug.  It is not unimportant that Nathuram Godse came from a Chitpavan Brahmin background: not only were there other attempts on Gandhi’s life by Chitpavan Brahmins, but the community as a whole felt especially aggrieved at the loss of its power as a consequence of British rule.  Having a Gujarati bania such as Gandhi at the helm of power was not calculated to make Chitpavans, who bemoaned the loss of their masculinity, feel emboldened as the sun began to set on British rule in India. But an extended commentary on all this is scarcely necessary, since Ashis Nandy’s “Final Encounter:  On the Politics of the Assassination of Gandhi”, offers a complex and brilliant interpretation of the sources of Chitpavan Brahmin anxiety about Gandhi.  Another reader, quite predictably, counsels that my piece may be ignored since it stems from the pen of a Non-Resident Indian.  Gandhi himself spent over 20 years in South Africa, and I suppose that some nationalist Hindus are still inclined to take the view that Gandhi remained a foreigner to India.]

Join 821 other subscribers
Follow Lal Salaam: A Blog by Vinay Lal on WordPress.com