Earlier this year, newspapers reported an unusual development in Britain before the subject of the story was quickly orphaned.  Considering that the British Prime Minister, Theresa May, and her ministers have the lofty and calamitous matter of Brexit on their minds, it is a wonder that anything else gets reported at all.  According to the Guardian and the New York Times, Ms. May has appointed a “Minister of Loneliness”.  It has been said that those who wield power at the very top are generally lonely:  as the example of Donald Trump suggests, the strong man always expects the unyielding loyalty of his inferiors and the slightest deviation from that norm puts the offender under suspicion.  It is not only dictators or autocrats who have few, if any, friends.  Many have sought to augment the (to put it mildly) deservedly tarnished reputation of Winston Churchill by suggesting that at critical moments in the conduct of the war against Nazi Germany, the British Prime Minister cut a very lonely figure.  Churchill’s supposed heroism, as it is described by some of his admirers, can never be appreciated by those who fail to recognize how he relied only on his strength and indomitable will power in the face of resistance from his own cabinet colleagues.

It is, of course, not this kind of loneliness that Prime Minister May had in mind when she appointed Tracey Crouch “Minister of Loneliness”.  Strictly speaking, Ms. Crouch is the Parliamentary Under Secretary of State for Sport and Civil Society, having previously served as the Parliamentary Under Secretary of State for Sport, Tourism, and Heritage.  Ms. Crouch’s present brief includes the portfolios not just for sport and civil society, but also lotteries, horse racing, gambling, and, since January 2018, “loneliness”.   This entire list is itself worthy of comment, but let it pass for the moment.  In announcing Ms. Crouch’s new responsibilities, Prime Minister Theresa May deplored the fact that “for far too many people, loneliness is the sad reality of modern life”, and she went on to say:  “I want to confront this challenge for our society and for all of us to take action to address the loneliness endured by the elderly, by carers, by those who have lost loved ones — people who have no one to talk to or share their thoughts and experiences with.”

The Prime Minister’s comments appear to have been prompted by the release, late last year, of a report from the Jo Cox Commission on Loneliness, named after the Member of Parliament who was murdered by a white supremacist in 2016. The Commission found that, in Britain, 9 million people, or around 14% of the population, described themselves as always or often lonely.  Nearly 52% of parents had experienced a “problem with loneliness” in the past, and 21% had felt lonely at some point in the previous week.  Among those who are at least 75 years old, one in three stated that “feelings of loneliness are out of their control”, and among the disabled and care givers the feeling of loneliness was similarly very high. 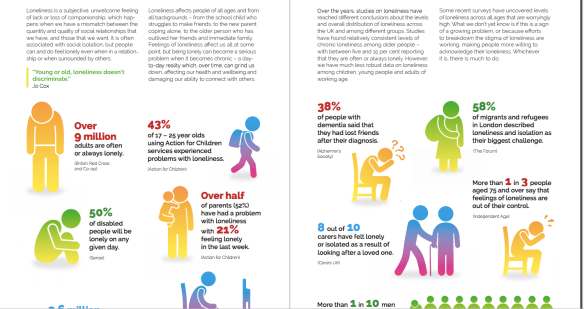 Just exactly how the Commission arrived at these findings is not at all evident from the report, but the numbers reported seem more than just plausible.  Nor is the “problem”—whatever the problem may be—one that uniquely afflicts the British.  The Japanese, in their customary fashion, have even coined a word, kodokushi, to designate “lonely deaths” among the elderly, that is the deaths of people which remain undiscovered for a long period of time.  The Japanese attention to this matter was spurred a few years ago by the discovery, in a residential complex where the apartments were packed cheek by jowl, of a 69-year old man three years after his death; all that remained of him, to be more accurate, was his skeleton, as rodents, maggots, and beetles had done their job.  The problem of loneliness in the United States may be even more acute, if the opinion of the former US Surgeon General, Vivek Murthy, carries any weight.  Murthy’s considered view is that social isolation is “associated with a reduction in lifespan similar to that caused by smoking 15 cigarettes a day”, and the title of his essay, “Work and the Loneliness Epidemic”, suggests that we ought to be paying at least as much attention to loneliness as we do to the opioid or obesity epidemics.

The Jo Cox Commission report is, in the argot of the day, “a call to action”, and the authors recommend the close monitoring of loneliness across all ages, the inclusion of measures of loneliness in “major national studies”, the issuance of annual reports, the creation of a literature with “easy-to-understand messages” to help people connect with others, and a nation-wide strategy to combat loneliness under a “lead Minister”—thus the appointment of Ms. Tracey Crouch.  The report exhibits some taste, insofar as it does not dwell on how much the “loneliness epidemic” has cost the exchequer; however, the co-chairs of the Commission, in a separate pamphlet, estimate that loneliness inflicts massive pain on the British economy, to the tune of 32 billion pounds [$42 billion], annually.  Ouch!

It is no surprise that ex-Surgeon General Murthy’s article should have appeared in the Harvard Business Review, which is not exactly a journal known for exhibiting any concern for the poor, the disabled, and the lonely.  If the Harvard Business Review has any interest in the subject of loneliness, one can speculate that some economist or policy wonk at that esteemed institution must have modeled loneliness and derived a formula which would help to alleviate this condition.  One suspects, too, that much of the concern about the lonely is feigned, inspired only by the thought that the lonely, like the poor, are a problem.  If the poor are despised because they cannot enter into the ranks of a consumer society and cannot therefore be fulfilled as human beings, the lonely are suspect because they appear to have brought their malady upon themselves.  However, under the present dispensation, that is to say on the worldview that predominates today, there is absolutely no problem that cannot be resolved through management techniques.  So long as one has clear “outcomes”, good “thought leaders” (an abominable phrase, if there was one), and and a healthy appetite for the gobbledygook that passes for English at the great business schools and other “centers of excellence”, problems can be managed effectively. 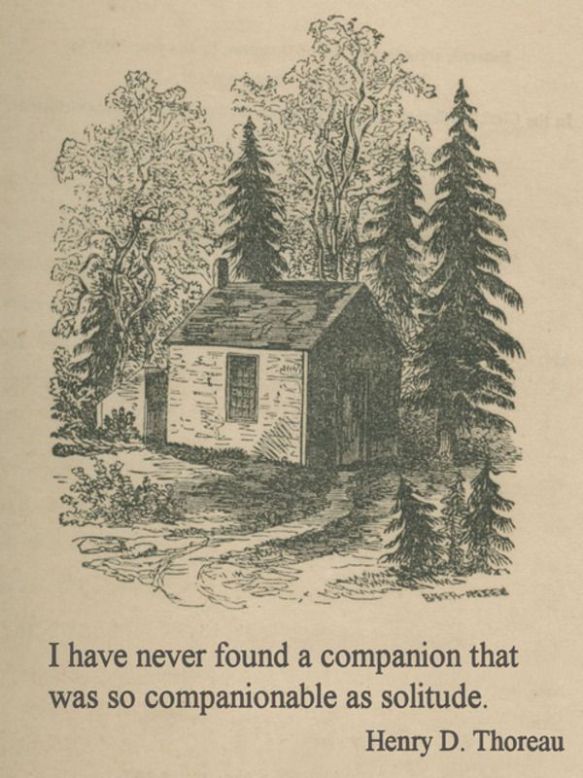 The Jo Cox Commission report on loneliness does not venture into the more difficult terrain of trying to understand why such a large percentage of Britain’s population describes itself as feeling lonely.  Public spaces survive in Europe to a much greater extent than they do in the United States:  public transportation is heavily in use, cafes spill over onto the streets, and pedestrians often command the streets.  Europeans do not generally live in gated estates; the idea of the communal meal still has its attractions, as anyone who has spent an evening in Barcelona, Paris, Brussels, Amsterdam, London, or countless other cities and towns across Britain and Europe can testify.  The Post-Millennials who do not know of an age when there was neither the internet nor the cell phone are perhaps surprised to hear that anyone could be lonely at all:  after all, one has merely to turn to Facebook, Twitter, or Google to be on one’s way.  There is little awareness of how digital technologies, which claim to foster relationships and produce a highly inter-connected world, produce distancing.  The social implications of such distancing are not apparent to most people.  One can also be quite certain that the Post-Millennials, perhaps more so than any other generation, will face the brunt of the loneliness epidemic.  Loneliness has yet to extract its pound of flesh from those who most mightily mock it.

It is a telling fact that the Cox Commission report has nothing to say about “solitude”.  The word does not appear in the document.  It matters because a phenomenon such as loneliness can only be understood dialectically, through its opposite; and the opposite of loneliness is not the company of others, or ‘relationships’, but solitude.  It is an egregious mistake to suppose, as often happens, that loneliness and solitude are one and the same thing.  Loneliness is never cultivated or sought; it is something to be avoided.  The sources of loneliness in pre-modern societies were rather few, most likely the loss of a family member, bereavement, enforced exile, and imprisonment; in such societies, a surfeit of human company rather than loneliness was more likely the source of discomfort for some.  Solitude, by contrast, is something that is cultivated and sought for, even valorized among those who value creativity or are predisposed towards a life of reflection.  In American, and more broadly modern, culture a dread of solitude is pervasive:  those who prefer solitude are often taken to be misanthropic in disposition.  Here, again, is Thoreau:  “I find it wholesome to be alone the greater part of the time.  To be in company, even with the best, is soon wearisome and dissipating.  I love to be alone.  I never found the companion that was so companionable as solitude.”

The cure for loneliness is not going to be found merely, or even at all, by connecting the lonely person with others.  The management gurus with their mantras of efficiency, and the personal relationship managers who pedal the anodyne languages of ‘caring’ and ‘customer satisfaction’, have nothing worthwhile to contribute in understanding the largely modern pathology of loneliness.  Perhaps, only perhaps, some sustained reflection on solitude may yet help us better to minister our loneliness.

7 thoughts on “*Ministering to Loneliness:  A Brief Note on a Largely Modern Pathology”