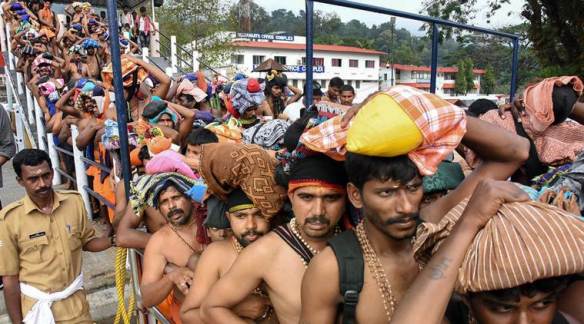 Devotees queue up to offer prayers at Lord Ayappa’s temple, Sabarimala, during the Malayalam month of ‘Vrischikom,’ 20 November 2018.  Photo:  Press Trust of India.

It needs to be said at the outset, and in the most unequivocal terms, that the still ferocious dispute — about which I blogged here around two weeks ago — over the Supreme Court’s decision of September 28 which opened the doors of the Sabarimala temple to females between the ages of 10-50 is fundamentally about the deep and pervasive anxieties among men over menstruation.  Everything else is a camouflage. 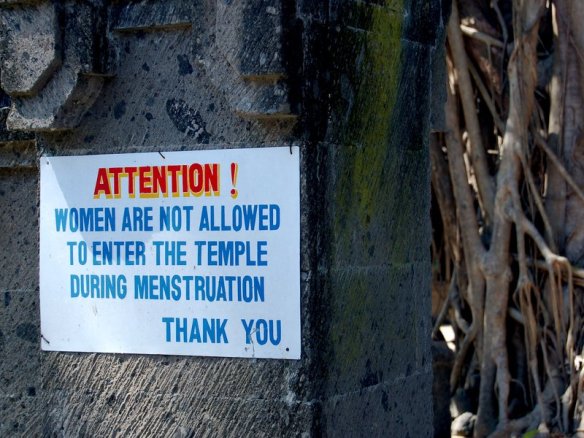 By a majority decision of 4-1, the Court ruled that the prohibition of girls and women from the ages of 10 to 50 on their entry into the Sabarimala temple was unconstitutional.  Though the court ordered that the temple be opened to females of menstruating age, protestors have blockaded the temple doors and completely obstructed the implementation of the court order.  The Supreme Court verdict over the right of women of menstruating age to entry a Hindu temple speaks to problems that afflict women all over the world, but for the present it will suffice to largely confine these remarks to the implications for Indians.

The terms in which the Court’s decision have been debated are clear enough.  Those who applaud the decision have described it both as an affirmation of Indian Constitution’s guarantee of equality between the sexes and as an individual’s right to freedom of worship.  Liberals decry the custom which has encroached on the liberty of women as a remnant of an atavistic past, and they salute the Court’s embrace of law as a tool to remedy social injustices.  As they point out, though restricting women from entering Sabarimala is generally defended in the name of “centuries-old tradition”, prohibitions on women were first enacted into law as late as 1965.  Indeed, to extend the liberal argument, what is given as a brief on behalf of a timeless custom is nothing more than what historians call “the invention of tradition”.  Customs that are often believed to have persisted from “time immemorial” are in fact very much a creation of the modern spirit.  Some liberals have also argued strongly that construing menstruation as something which is disgusting and polluting is not only indefensible but a sign of ignorance and demeaning to women.

The Court’s critics, on the other hand, argue that women feature prominently among the demonstrators who object to the Court’s decision and they are oddly enough being denied a voice in the matter.  Conservatives are firmly of the view that the Court and its secular allies in the media and intellectual class have disdain for Hindu religious customs, and they have put forward the more compelling argument that social change is ineffective and even resented when it is seen as an imposition from above.  Matters of religious faith, it is argued, cannot be legislated.

The dispute over Sabarimala, however, is also distinct from other controversies that have erupted over judicial intervention in matters of religious faith in that the reigning deity of the temple, Lord Ayappa, is said to be celibate.  Thus the presence of females of menstruating age is said to be an affront to his dignity.  As an affidavit filed in 2016 by those who sought to preserve the ban on women states, the temple authorities and devotees are bound to ensure that “not even the slightest deviation from celibacy and austerity observed by the deity is caused by the presence of such women.”

The trope of a male ascetic or even a god being fatally tempted by an attractive female is as old as Indian civilization and is present in many other traditions as well.  It is, however, the menstrual politics that more than anything else which informs the dispute, even if menstruation remains the unspeakable.  The notion that a menstruating woman is polluting or should remain in the shadows is scarcely unique to India and anthropologists have documented the practice of isolating a woman during her menses across dozens of societies.  Nor should one suppose that only so-called lesser developed or “traditional” societies treat menstruation as discomforting and polluting.  We might wish to remind ourselves that during one of the Presidential debates, then candidate Donald Trump, rattled by some questions from Fox News anchor Megyn Kelly, characterized her as having “blood coming out of her wherever”, a barely disguised reference to her periods.  Menstrual pads have been sold in the United States for over a century as “sanitary napkins”.

There can scarcely be a society where men have not sought to regulate women’s sexuality.  The entry of women of menstrual age into Sabarimala, a temple in a state where the female literacy rate is at least 92%, has been curtailed because menstruation is one domain over which men have little or no control. Indeed, if men have often assumed that they have sexual entitlements over women—an assumption in defiance of which the “Me Too” movement has been launched in many countries—a woman’s period constitutes what may be called a sex strike.  It is the one time of the month that, especially in societies where the vulnerability of most women is acute, a woman can refuse sexual advances, whether of her husband, sexual partner, or of any other man, and generally get her way.  This is not a liberty that she is otherwise able to exercise often, but she may still be punished in other ways.  This is the larger and unstated aspect of what may be described as the menstrual politics—of Sabarimala, and, in a wider context, of human societies where a woman’s most intimate bodily function is not merely a “biological fact” but rather a cultural and social fact pregnant with immense implications.

12 thoughts on “*Anxieties over Sabarimala Temple-entry: Menstruation as Sex Strike”