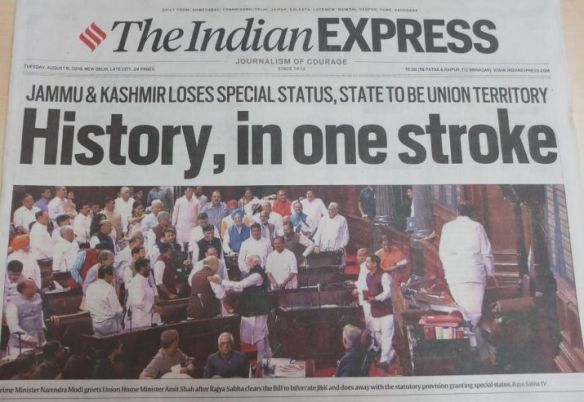 A deed most foul has been done.  A veil has come down upon Kashmir, but it shall surely lift—even if there will be no suhaagraat, no night of consummation.  The country has been overwhelmed and, for the present, few understand, and even fewer are willing to accept, that a constitutional coup d’état has taken place in India.  The very idea of a constitutional coup will be foreign to those who are accustomed to thinking of a coup as the overthrow of a democratically elected government and, more likely, the imposition of a dictatorship or military rule.  Coups bring to mind tanks on streets, subterfuge, massive misinformation, and fallen heads—a nasty affair.  It has already been argued by the present government and its supporters that everything that was done by the Centre was within the parameters of the law and that Parliament has only exercised its sovereignty.  A bill was introduced to bifurcate the State of Jammu & Kashmir into two Union Territories, one (J & K) with a Legislative Assembly and one (Ladakh) without, and the bill was passed by the required majority both in the Rajya Sabha and Lok Sabha.  On this view, the BJP has, if anything, done everything within its power to affirm and even embellish the sovereignty of Parliament, and all talk of a “constitutional coup” should be construed as nonsense.

Let us, however, first consider only the circumstances—and not the legal conundrums—under which Kashmir was blanketed into such darkness that overnight a State of the Union was wiped out and ceased to exist as such.  Misinformation would be a mild word to describe how the Centre prepared for the coup by describing, in vaguely worded statements, some “terrorist” threats of which it had received information that compelled it to cancel, for the first time in living memory, the Amarnath Yatra, order tourists to leave the Valley, and move in more troops into what is already the most heavily fortified piece of territory in the world.  The word “terrorist” has, of course, become a license for the most egregious offenses—more often than not, by the state, and not merely in India.  The state has only to shout the word “terrorist” and everyone is expected to become compliant, submissive, and patriotic.

On late Sunday, August 4th, the government took the next steps necessary to pull off the constitutional coup.  In the stealth of the night, it placed democratically elected leaders under house arrest.  Then, in the hours following, it placed the Valley under lockdown.  All internet, mobile, and landline connections with Kashmir were snapped:  the reader might like to think of quarantine being imposed, not just on a mere few suspected of harboring a contagious disease, but on an entire population of some 12 million.  Section 144 of the Criminal Procedure Code, which imposes curbs on people assembling together and owes its origins, not surprisingly, to colonial-era legislation, was brought into effect.  Yet more troops were airlifted into Kashmir—as if there weren’t enough over the 600,000 or more Indian army soldiers, CRPF, and BSF who have already turned the state into a heavenly paradise for large-scale corruption, all of course overlooked in the name of “national security”.  This is, need it be said, exactly how a clandestine state operates—a state, in other words, that bears no responsibility to its citizens.

It would take the Home Minister to put the constitutional touches to the coup.  Much has been written in the last few days on whether the actions of the Centre will withstand the scrutiny of the Supreme Court.  It cannot be said that the present Supreme Court inspires much confidence in those who believe in democratic values and the unfettered reign of the “rule of law”. Since many others have commented on the legal questions, it will suffice to make only two points which touch on the question of what I have termed a constitutional coup d’état.  First, unlike other States or Union Territories to which J & K has been likened, for instance with respect to the question of restrictions on the sale of land or property to non-residents or “foreigners”, J & K is distinct in that its relationship to India is also and uniquely governed by the Instrument of Accession which Maharaja Hari Singh signed on 26 October 1947.  “Nothing in this Instrument shall be deemed to commit me”, states Article 7 of the Instrument signed by Hari Singh, “in any way to acceptance of any future constitution of India . . .”, by which it is meant in part that there is nothing which warrants the argument that J & K must necessarily be subject to the Constitution of India. 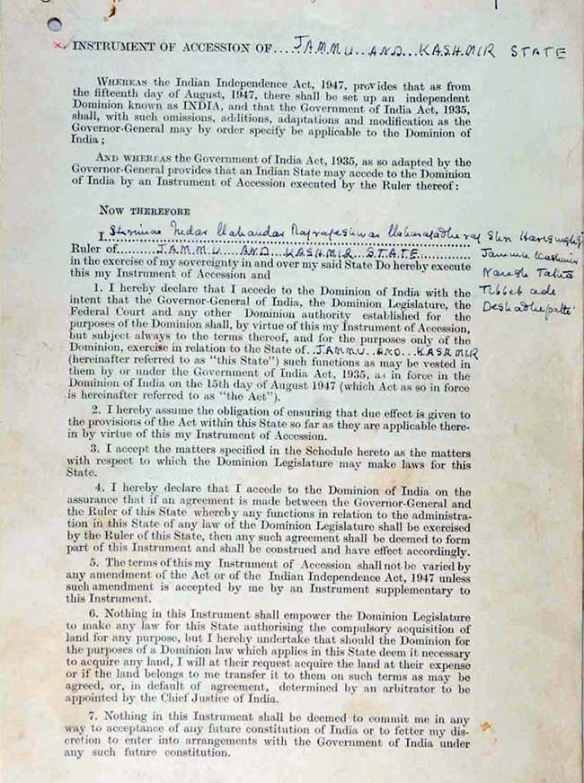 Secondly, we must understand the sleight of hand by which the Home Minister was able to argue that it had followed the letter of the Constitution.  One particular provision (sec 3) of Article 370 makes possible an amendment, but it stipulates in no uncertain terms that “the recommendation of the Constituent Assembly of the State . . . shall be necessary before the President issues such a notification.”  The Constituent Assembly of the State of J & K, it should be noted, was dissolved—not merely adjourned—on 17 November 1956.  Thus the legislative body without which the President of India is not empowered to make a decision does not exist.  The Centre took upon itself to argue that, in lieu of the Constituent Assembly, the State Assembly of J & K could well serve the purpose—except that, rather conveniently, since J & K has been under Governor’s or Central Rule, it then devolved upon the Parliament of India, as the next highest sovereign body, to take the matter into its hands.  And so the constitutional coup was accomplished.

Constitutional coups are, if anything, more dangerous than the classic type of putsch where the dismissal of a government and “regime change”, or the replacement of one type of dictatorship by another, takes place in the open.  Even many who are critical of the BJP and its aggressive championing of Hindu supremacy, however much it may be disguised by platitudes about an “inclusive society”, or the utterly pedestrian and insincere slogan of “sabka saath sabka vikas sabka vishwas” (everyone’s support, everyone’s development, the trust of all), have been taken in by the coup effected by the Centre.  Indeed, it is possible to argue that the BJP is far from being the only party that was hostile to Articles 370 and 35(A), and students of Indian politics are well aware of the fact that many of the provisions of Article 370 had been hollowed out over the years.  J & K has also been under Governor’s rule on previous occasions.  (For all practical purposes, President’s Rule and Governor’s Rule are the same, except that, since many provisions of the Constitution of India were not applicable to J & K, the state was placed under Governor’s Rule.)  Why, then, some will argue, should a ruckus be made over the Centre’s arrogation to itself of the right to dismantle the State of Jammu & Kashmir, create two new “Union Territories”, and ensure that the Constitution of India applies to this state as much as it does to every other state of the Union?

What makes a constitutional coup far more dangerous in certain circumstances to the survival of a democracy than the common army-led putsch or dictatorship is the fact that it obscures the vital question of the relationship of means to ends.  However much the Centre may have felt justified in abrogating Articles 370 and 35(A), the fundamental question of the sovereignty of the people, on which the idea of a Republic rides, cannot be dodged.  The people of Kashmir were, needless to say, not consulted in the least; to the contrary, they have been isolated, much like hardened criminals who are placed in an isolation cell.  A democracy is also to be distinguished from other forms of government in its attentiveness to people and common citizens; in a different language, it is distinguished by its sensitivity to means.  It is all the more ironic that a constitutional coup d’état should have taken place in India, since it is difficult to think of anyone else in modern history who was more attentive to the question of means than Mohandas Gandhi, the so-called “Father of the Nation”. Gandhi went so far as to argue that it was enough that those who were in politics paid attention to the means.  The present government, on the other hand, is dedicated to the proposition that ends alone matter:  only the faint-hearted, the romantics, the idealists, and the effeminate think of means.  The constitutional coup effected by the BJP is yet another one of its orchestrated blows to eviscerate the memory and legacy of Mohandas Gandhi.

4 thoughts on “*How Democracies Wither:  The BJP’s Constitutional Coup d’état in Kashmir”