I have argued in the first part of this essay that Ambedkar was never far removed the ideal of spiritual fulfillment and that he sought to achieve this within the matrix of institutionalized religion in some form or the other.  What, then, of his relationship to Marx?  In spite of his relentless critique of Hinduism, some would say more specifically Brahminism, Ambedkar could not escape some of the very idioms that have given Hinduism and the other religions that have arisen from the soil of India their distinctive character.  As an illustration, and at least as a provocation, one might want to consider his warm acceptance of the idea of a guru, a status he bestowed on the Buddha and, quite possibly, on Kabir and Jyotirao Phule.  He had a more complicated relationship to Marx, with whose writings he had acquired considerable familiarity as a student of Vladimir Simkhovitch at Columbia University in 1913-14.  Simkhovitch had published in 1913 a book entitled Marxism versus Socialism, the very title of which is suggestive of the critical if appreciative outlook that Ambedkar’s teacher, and later Ambedkar himself, would have of Marx’s body of thought and all that it had wrought.

Ambedkar continued his studies in economic history, social thought, and sociology over the years, and he accepted most of Marx’s theses about the oppressive nature of capitalism and the inevitability of class struggle even if he found his ideas of historical materialism and what may be called the iron laws of history somewhat rigid and overly determined by Marx’s grounding in the history of the West.  Marx read widely, no doubt, but much of what he had to say of India can be encapsulated under the Asiatic Mode of Production.  (No doubt, too, some of his more rigid defenders will take umbrage at this characterization, but many of Marx’s sources have to read with extreme circumspection.) Besides all this, of course, was the brute fact that, as a Dalit, Ambedkar was assimilated to the experience of oppression from birth.  Books could sharpen his understanding of humiliation and exploitation, and move him to explore what drove men to find satisfaction even enjoyment from degrading others, but he knew firsthand what it meant for a people to be born into poverty, reduced to indignity at every turn, thwarted in every endeavor to improve themselves, and ground into the dust. “Had Karl Marx been born in India and written his famous treatise Das Capital sitting in India,” Ambedkar was to say, “he would have had to write in an entirely different fashion.”  The very first question that Ambedkar might have put to Marx would have most likely been this:  How would the dictatorship of the proletariat contend with caste? Did Marx really have a comprehension of this phenomenon called caste?

The late essay, “Buddha or Karl Marx”, a fragment from a larger book that Ambedkar may have written but the manuscript of which has not been found, offers the reader a keener sense of the shortcomings that he attributed to Marxism and the reasons for his attraction and conversion to Buddhism—all this, perforce, also being the backdrop to his outlook on the history of Islam in India.  We need only to turn to it very briefly.  He argues that little survives of Marxism of the mid-19th century and “much of the ideological structure raised by Karl Marx has broken to pieces.  There is hardly any doubt that [the] Marxist claim that his socialism was inevitable has been completely disproved.”  What remains of the “Marxist creed”, says Ambedkar, can be summarized in a Buddha-like four-fold path:  the function of philosophy is to reconstruct the world; there is class conflict; the private ownership of property entails exploitation and sorrow; and, lastly, as private property is the source of such sorrow, it must be abolished. 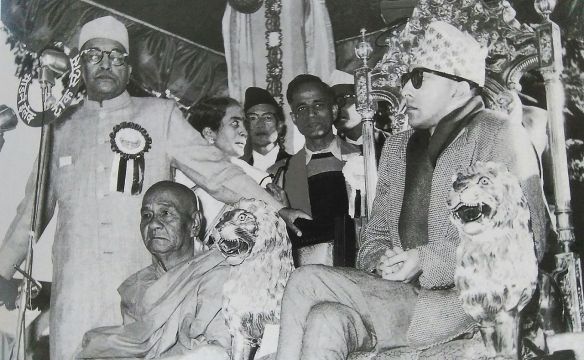 Dr. Ambedkar is shown delivering his historic speech, “The Buddha and Karl Marx”, on 20 November 1956 before delegates of the 4th World Buddhist Conference held at Katmandu, Nepal. KIng Mahendra of Nepal (extreme right) and Mrs. Ambedkar are also shown in the photograph.

In the achievement of these objectives, Ambedkar argues, communism commits its gravest sins.  The Marxist creed is addicted to violence and to the idea of the dictatorship of the proletariat.  The Buddha, by contrast, was a proponent of ahimsa, but he did not adhere to as rigid a conception of ahimsa as did Mahavira, the founder of Jainism.  To this end, he was more reasonable since he recognized that the use of “force” may be necessitated at times and that it is critical to distinguish between “force as [creative] energy” and “force as violence”.  As for dictatorship, the idea was entirely foreign to the Buddha:  “he would have none of it” and he was a “thorough equalitarian.”  The Buddha and Marx may have sought similar ends, but Ambedkar declares that the Buddhist way is far more efficacious and far more in keeping with notions of human dignity and freedom: “One has to choose between government by force and government by moral disposition.”  The Buddha sought only that each person brought up under his teachings should “become a sentinel for the kingdom of righteousness”, a paragon for others in that he would do what was good not because he had been forced to do so but because his “moral disposition” had shaped him to do the same “voluntarily”.  Ambedkar rounds off the essay with a denunciation of communism’s moral failings with what should by now be recognized as a characteristic affirmation of the centrality of religious life:  “But to the Communists religion is anathema.  Their hatred of religion is so deep-seated that they will not even discriminate between religions which are helpful to Communism and religions which are not.” 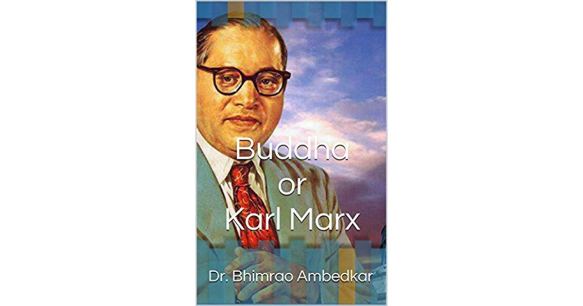 The reasons that led Ambedkar to steer clear of Marxism also explain, in part, his turn towards Buddhism. So much has been written on what finally led him to embrace Buddhism that it is unnecessary to visit this terrain except in the briefest terms to clear the path that leads us to his views on Islam.  The Buddha, to reiterate, was to him a figure who was democratic to the core and without peers as a moral exemplar.  In one speech after another, Ambedkar described how his political philosophy was enshrined in three words:  “liberty, equality, and fraternity.” People might naturally imagine that he had derived these values from the French Revolution, but they were mistaken in holding to this conception:  “My philosophy has roots in religion and not in political science.  I have derived them from the teachings of my master, not Marx.”  Classical liberal thought compromised on equality, and communism had little regard for liberty:  “It seems that the three can co-exist only if one follows the way of the Buddha.”

Translated into Swedish by Eric Karlsson and available here:  https://medicinskanyheter.com/eric-karlsson/buddha-inte-marx-ambedkars-otvetydiga-bekraftelse-av-en-modern-religion.html

14 thoughts on “Buddha not Marx:  Ambedkar’s Unequivocal Affirmation of a “Modern Religion””