(No. XII in the series:  The Fact of Being Black:  History, Culture, Politics)

Police officer exercising “knee restraint” on George Floyd in Minneapolis, about 8:05 PM, Monday, 25 May 2020, frame from a video taken by a witness to the killing.

As I write this, nearly all of America’s largest cities are under curfew extending through the night into dawn. It is not even a week since George Floyd, a 46-year old African American male, died as he lay pinned to the ground by a white police officer.  Minneapolis, where the killing took place, has been roiled by protests for the last five days, and demonstrators have taken to the streets across the country, necessitating the activation of the National Guard in twelve states. Activists and protestors have surrounded the White House, which looks something akin to a medieval-era fortress, or the sprawling palace of a tin-pot despot of an autocratic regime, rather than the mansion of the chief executive of a free democratic state. All this is happening as the United States reels under the continuing devastation wrought by the coronavirus pandemic:  over 105,000 people have been killed by Covid-19, three times more than in any other country, and America is far from having brought the situation under control.  In Los Angeles, where the scars of previous civil uprisings precipitated by anger against racism have not been erased, the city mayor has ordered all Covid-19 testing centers shut down.

Picture of three police officers placing their knees upon the pinned and handcuffed George Floyd, from a second video taken by a witness.

Unarmed black men are killed in the United States routinely, often by policemen, and most such deaths go unreported and unsung, and are only infrequently the occasion for large-scale demonstrations.  But George Floyd’s death has struck a chord for many reasons among people who still retain something of a moral sensibility.  Covid-19 has claimed a disproportionately large number of black deaths, largely because public health spending is abysmally low across the United States and the profound disregard for the value of the lives of black Americans has made them more vulnerable to disease.  But other incidents have taken the lid off the preposterous idea, which many conservatives especially like to peddle, that racism afflicts only a small portion of the population, and that white America has atoned sufficiently enough for whatever injustices may have been perpetrated against black people in the past. On the morning of the same day that George Floyd was murdered—the white police officer, Derek Chauvin, has now been charged with murder in the third degree—a 57-year old African American male by the name of Christian Cooper, who is a science editor and birder, was taking a walk in New York’s famed Central Park.  When he saw a cocker spaniel digging up the shrubbery around him, Mr. Cooper requested its owner, Amy, a 41-year old white woman who by sheet coincidence shares Mr. Cooper’s last name, to leash the dog as required by park regulations.

Amy Cooper responded to Mr. Cooper’s request with the warning that she was going to call the police, “I’m going to tell them there’s an African American man threatening my life”.  Mr. Cooper not only kept his distance from her, but had the presence of mind to record the exchange on his phone camera; he also encouraged her to call the police, which she did so.  Ms. Cooper holds a MBA from the University of Chicago, one of the most renowned institutions of higher education in the world, and could therefore be described as an “educated” woman—if the scare quotes are necessary, it is only because it is difficult to describe the vast majority of economists and business school graduates as people with even the slightest degree of moral sensibility.  But even a white woman without her privileges would have known that nothing, absolutely nothing, is more calculated to put a black man’s life at risk in the United States than the slightest insinuation of the threat to a white woman’s life or “modesty” from a black man. Hundreds of black men—and, as the notorious murder of 14-year old Emmett Till by two white men in Mississippi in 1955 suggests, even adolescent boys—were lynched on nothing more than the mere suspicion that they had made sexual advances towards white women.  Ms. Cooper was, if anything, putting Christian Cooper’s life into danger by calling the police.

The callous disregard that white America has for the lives of African Americans is of course intrinsic to the story of America and on display in every aspect of life in this country.  Slavery was abolished 150 years ago, and yet it was not:  though it disappeared from the law books as such, the period of “Reconstruction” effectively led to the second enslavement of black people with their entrapment into chain gangs, debt peonage, and various others forms of servitude. The gains of the Civil Rights Movement in the late 1950s and 1960s were not insignificant, but white America is spectacularly ingenuous in cooking up ways to keep the preponderant number of African Americans in a state of fragile economic existence, stripped of opportunities for social and political advancement, and trapped in a vicious cycle of poverty and crime.  Among America’s many boasts, one should not forget that it boasts of by far the largest prison population in the world, and African American males account for 35% of those who are incarcerated.  The country is appropriately described by many commentators and scholars as an “incarceral state”:  this description, however, occludes the fact that white America makes a business—and that is nearly all that white America is good for these days—out of degrading black lives. 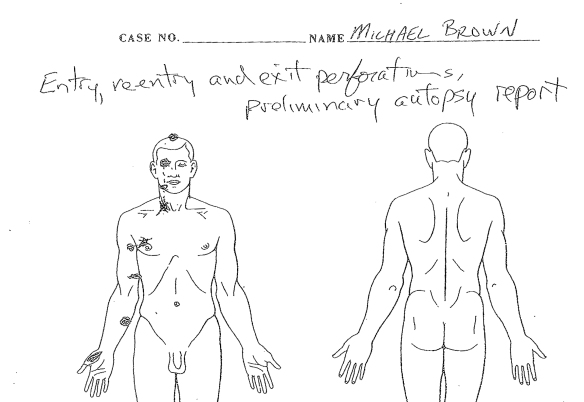 The autopsy report for Michael Brown, an unarmed black teenager shot and killed on Aug. 9, 2014, by Darren Wilson, a white police officer, in Ferguson, Mo., a suburb of St. Louis. The Grand Jury appointed to investigate the case and bring forward charges failed to issue an indictment against him. Subsequently, the US Department of Justice published a lengthy report offering a scathing account of the racism in the police department of Ferguson.

There have been frequent unarmed killings of black men and consequently civil uprisings in recent years in Ferguson, Baltimore, and other cities. Still, there is something ominously barbaric in the killing of George Floyd.  He is alleged to have used a forged $20 bill at a store; the suspicious clerk called the police, who found Floyd in a car parked outside the store. The precise details of what transpired next are in fact rather irrelevant, as a subsequent video taken by a bystander clearly establishes, but one can be certain that at least some among the loyal defenders of the police, which includes the entire Republican establishment in the United States, will in private at least argue that Floyd was not even remotely innocent.  The video shows the police officer Chauvin pressing his knee upon Floyd’s neck:  he continued to do so for nearly nine minutes, though Floyd, who was pinned to the ground and handcuffed behind his back, is heard repeatedly pleading for his life with the remark, “I can’t breathe.”  While the other three police officers—two of them are shown in a different video joining Chauvin in kneeling upon Floyd—stand by, Chauvin keeps his knee firmly pressed upon Floyd’s neck: sometimes he gazes with absolute nonchalance into the camera, with the confidence of someone who acts with the brazen awareness that he can expect immunity from wrongdoing.  What stuns most is that, as Chauvin keeps the pressure over Floyd’s neck, throughout his hands remain in his pockets:  he may as well have been taking a stroll along the river, whistling a favorite tune.

Though black Americans and others—Hispanics, Asians, whites—of liberal persuasion, or animated by notions of justice and enraged at police brutality, have taken to the streets, it must be recognized that there is no solution to the problem of virulent racism within the present framework of the American Republic.  That is the only germane fact and it is one that even the most well-meaning and liberal Americans can neither recognize nor comprehend.  It is not merely a question of weeding out, to use the old cliché, a “few rotten apples”—but some people do understand this much.  Many others understand, as well, that police reforms will have to be far-reaching:  the job of the police in this country is less “to serve and protect” and more to ensure white hegemony.  Some liberals and advocates of social justice have long advocated for structural reforms, but discussions of this tenor have been going on for decades and such reforms, including so-called “community policing”, cannot alter the fabric of white American thinking.

For every one Chauvin who is arrested and charged, there are a hundred Chauvins in the police forces; there are hundreds of thousands of such Chauvins in the white power establishment, and millions beyond.  The entire Republican party, and what is called “Trump’s base”, is saddled with the disease of white supremacy; but Democrats should not think that they are immune, even if some have made a supreme effort to transcend the limitations of their race. The question of white racism does not at all come down to the question of “Republicans” and “Democrats”, who are born of the same beast. It won’t even do to speak of the “moral decay” of the American Republic, as many people who are understandably anguished by the racial hatred that has led to the present civil uprisings do so, since the notion of “decay” presupposes that there was a time when the country was decent.  As far as African Americans are concerned—and we won’t even stop to ask what native Americans, whose invisibility is if anything even greater, think of the “Great White Man”—there has never been a time when America was “decent”.  There will be many more such civil uprisings, and slowly but surely it will dawn upon people, both here and in the rest of the world, that America as we know it is a country living upon borrowed time.

(This is a slightly revised and longer version of an essay first published on May 31st under the same title by ABP Media Network at abplive.in, here.)

5 thoughts on “The Killing of George Floyd:  Racism in a Country Living on Borrowed Time”