Today, at 10 AM (California time), the Reverend James M. Lawson, one of the principal architects of the “civil rights movement”, and at the age of 92 an extraordinary fount of energy who remains a peerless example of the practitioner of nonviolence who leads by his moral example, and I–together with Dianne Dillon-Ridgley, a lifelong activist in human rights struggles–will be taking part in an hour-long panel discussion on “Gandhi, the Civil Rights Movement, and the Continuing Quest for Justice and Peace”.  Rev. Lawson was last seen on the national stage just a few weeks ago, when he was called upon to speak at the funeral ceremonies for Representative John Lewis, a long-time Congressman from Georgia who was one of Lawson’s proteges in Nashville where the nonviolence training workshop was pioneered by Lawson.  John Lewis, of course, went on to become a major figure in the movement, taking part in the freedom rides, becoming the head of the Student Nonviolent Coordinating Committee (SNCC), and, perhaps most famously, marching alongside Rev. Dr. Martin Luther King, Jr. at Selma.  Rev. Lawson delivered a stirring funeral oration for John Lewis.

In early 2013, Rev. Lawson and I commenced a series of conversations that extended over 26 hours in thirteen long sessions, some as long as 3 hours.  In connection with the forthcoming panel discussion, I thought of reproducing some passages from one of our conversations to which I have added the title, “Just Who are the Racists? And the Progressives?” It is generally supposed that racists emanate from the ranks of the uneducated, the illiterate, and the working class.  In India, Gandhi had a very different opinion on who had contributed the most to the movement of nonviolent resistance, and in this conversation, prompted by a question and some remarks from me, Rev. Lawson ventures to weigh in on this matter and likewise punctures a great many liberal pieties.  The excerpts below from a conversation in 2015 have been edited very slightly, largely for style, and the flavor of the conversation has been retained.  Readers interested in the panel (with apologies for the short notice here) can find information in the link below and they will be taken to the Zoom link for the panel discussion.  The event is free and open to the public:

VL:  You have mentioned that you still puzzle over the fact that as a young boy you were able to have some sense of what is meant by racism, and that as a young man you were able to arrive at a certain understanding about war in general, and then certainly about the war in Vietnam being morally incorrect and unacceptable. Yet, on the other hand, this war was actually driven in some respects by advisors who came from, as you said, the most prestigious educational institutions in the United States, the McNamaras and the McBundys and George Kennan and many others.

Before posing my question to you, I would like to relate an anecdote. That anecdote is to be found in a little book written by one of Gandhi’s associates, Kaka Kalelkar, who mentions that sometime in the mid-1930s, Gandhi was visited in his ashram by a clergyman.  I don’t know much about this clergyman. I haven’t really researched him. Perhaps you’re familiar with him. I don’t know which denomination he belonged to but a clergyman by the name of Reverend John Mott spent one week with Gandhi.

VL:                  From the United States. John Mott, OK, spent one week with Gandhi. Over the course of the week, they had a number of conversations and one of the conversations, which is now related as an anecdote in this little book by Kaka Kalelkar, runs as follows.

Reverend Mott asks Gandhi, well, Mahatmaji, you being an observer of the Indian scene for such a long period of time, tell me, what is it that fills you with the greatest hope?

Then Reverend Mott asks him, what fills you with the greatest despair?

Gandhi ponders and gives the following reply. He says, it is the hard-heartedness of the educated that fills me with the greatest despair.

I always found that remarkable because Gandhi seemed to be suggesting a number of things. One is the imperviousness of the highly educated, very often, to such things as compassion and social justice. We are accustomed to thinking in the liberal world view that the more educated you are, the more emancipated you are, the more driven you are by considerations of social justice, and so on.

I think actually Gandhi came to a dramatically different view of this matter over the years. I think in some ways, he did not see formal education as something that was likely to lead to building up of good character, good moral character, or likely to lead one to judicious and reasoned views about ethical matters; in fact, what education did very often, especially education among the elites in the best institutions, is to turn one into a self-serving creature.

There are entire books that have been written about how the vast majority of what are called the great proconsuls of the empire, the British Empire in this case, came from a handful of Oxford and Cambridge colleges. One single college like Balliol, for example, generated a huge number of these master empire builders.

I think that there’s something to reflect over here about what is the relationship between education and, on the one hand, the aspiration for freedom, the drive for self-determination, and on the other hand, with such issues as social justice. I think there’s nothing that demonstrably proves that those who were educated are much more likely to be sensitive to these issues. I think there might be cases where certain kinds of education might actually be a hindrance to the development of a kind of a more refined sensibility that is aware of such matters as social justice and equity.

What would be your thoughts on that, more broadly?

JL:                   Well, number one, there is a clear parallel in what you say in white racism in the United States because, for many years, I have heard from educated White people that it is the lower classes who are the racists, not them, even though in the 19th century, after the Civil War, it was business people who helped to promote the development of the Ku Klux Klan and the Night Riders and the shooting down of Black people. The business community was greatly involved in that. They did not want, anymore did the Ku Klux Klan, the Black skilled workers coming off the plantation and being the major skilled people across the United States in that short period of time.

We have stories from these people out of 19th century who did this work. Frederick Douglas somehow learned the trade of building ships, and as a young teen was loaned by his–What’s the word–loaned out by his master to another master who put Douglas to work on ship building in Baltimore. He managed to save some money doing that so that he could plan his escape. He’s an example of one who was a skilled boat builder with the wood and could earn money for the master doing it.

That’s another thing that’s haunted us here, that all sorts of White so-called moderates and liberals have helped to keep the system intact and have asserted at the same time that it’s the White poor people, it’s the White trash. The second aspect about that that is clear to me is that the White elected officials from Mississippi, will not own their White poor in Mississippi or Louisiana or in New York, even. They will not own the White poor. The Virginia political scene, the West Virginia political scenery does not acknowledge their own White poor in their-

JL:                   That’s right. In their midst. Some of the Appalachian and rural poor among the Whites have some of the deepest forms of poverty that we have in the United States. 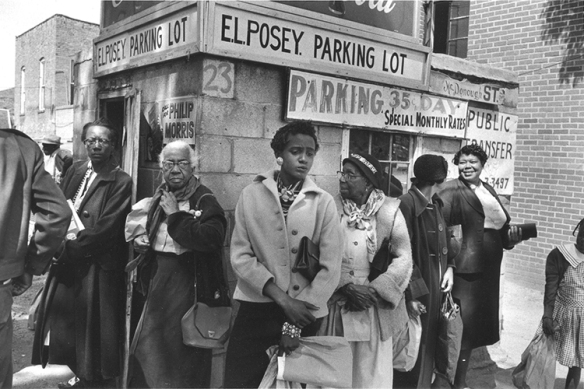 JL:                   That’s another issue. I just had a long conversation with one of the people that I counsel with, who’s organizing, and … I did try to suggest to him that the impetus for the movement did not really come from the educated. Even in the Black community, there was a mixture of educated, people with college degrees and university degrees, but [also those with little or no education]. Well, for example, in the Montgomery bus boycott, the major rider of the bus in Montgomery was a Black woman working in a White home for a dollar a day. Those women became, in many ways, the emotional catalyst to keep the bus boycott going. Those women came to the mass meetings week after week with a major emotional charge that said, keep the bus boycott going until things change. Ed Nixon [Edgar Daniel Nixon, known as E. D. Nixon, a civil rights leader, union activist, and a principal figure in the Montgomery Bus Boycott] may have had that passion and Rosa Parks, but it was in many ways, the women on the buses who, in spite of the hardship that they encountered, insisted the boycott should stay in place until they got more.

VL:                  I think that you are, in that sense, largely in agreement with the views that I’ve just put forward. In all of these movements, one would have to really look very seriously, I think, at the question of what is the place for education? What role do the educated elites play? What role do working-class people play? and women?

JL:                   It’s clear to me that we’re in the plight that we are in today in the United States because those of us with degrees and so forth, who mostly lead the institutions of the country nowadays, have failed to have the wisdom we needed to prevent what’s going on from going on. We’ve lacked the character to prevent it. Or, we have been so mesmerized by our education and the fact that we have income enough to eat that we cannot see the damage we’ve permitted to happen to our society. It’s clear to me that in the 20th century, movements of people caused the emergence of what some have called the middle class. This could not have been done without these people’s movements.

Now capitalism is striking back and reversing those gains and, for the most part, educated leadership that have had the advantage of those gains has not seen what’s going on.