He may be the “Father of the Nation”, but it is more than his reputation, lately under assault from all the wise ones, that lies in tatters.  A plaque at the entrance to the Aga Khan Palace in Pune, where Gandhi was confined for two years after he issued a call to the British to “Quit India” in August 1942, furnishes a brief introduction to this “monument of national importance”.

On my visit to this monument in March of this year, I found it in a state of utter dilapidation.  This is far from being India’s only “national monument” that has suffered from neglect and indifference; however, its association with Gandhi most likely ensures that it is not likely to see a revival of its fortunes.  If the murder of Gandhi was a permissive assassination, one celebrated by those elites who were enraged at the thought that the old man would if alive continue to exert an influence upon the affairs of a young nation-state struggling to find its feet in an evil world, permissive neglect seems to be the modus operandi through which Gandhi is slowly being sent into oblivion.

The Aga Khan Palace is remembered not only as the place where Gandhi served out the last of the many prison terms handed down to him by the colonial regime.  One of the most moving photographs in the vast archive of images of Gandhi shows a forlorn Mahatma sitting in a corner of the room across from the body of the deceased Kasturba.  She has lately, and not a moment too soon, come into the awareness of many as a woman who did not merely stand by her husband but was in the front ranks of those whose names are inscribed in the annals of anti-colonial resistance.  (No, it is not political correctness that has provoked an interest in Kasturba.) It is here, at the Palace, that their marriage which lasted over 60 years was brought to an end by her demise.  Not only that:  Mahadev Desai, reputedly closer to Gandhi than any of his sons, and often characterized in the Gandhi literature as his Boswell, also died during his confinement at the Aga Khan Palace.  In any other age, Mahadev, an uncommonly good writer and translator with a gift of observation and an exceedingly disciplined mind, would have achieved recognition as something more than the amaneunsis of Gandhi.

One might have expected, then, the Aga Khan Palace to be preserved as a treasured place in the nation’s history.  There are nearly a dozen large oil canvases; not all of the paintings are of great artistic merit, but they are a distinct and unique part of the repertoire of visual representations of Gandhi.  The canvas showing Kasturba in the cradle of Gandhi’s lap is not only unusual, but suggests a quiet intimacy between them which may not be visible to those who are determined to establish Gandhi as someone who exercised a tyrannical sway over Kasturba.

One of the somewhat better preserved paintings, though “Rural India” is not very much on the minds of the Government of India or the country’s elites.  Photo: V. Lal, 2016.

“New Hope for Rural India” is one of the rare paintings of Gandhi that points to his engagement with the “Constructive Programme”.  All of the paintings are clearly in want of restoration:  the colors have uniformly faded, on occasion there are pigeon droppings, and the wooden frames show signs of decay.  Some paintings, shockingly, are now beyond repair.  Gandhi is little more than a white ghost in “A Crusader for Humanity”; many of the other figures are blurred.

The artist was not attempting to create a blurred effect with his painting on Gandhi as a “crusader for human equality”.  Photo:  Vinay Lal, March 2016.

As is common in India, the museum displays resonate with inspiring slogans and exemplary didactic lessons—except that the unmistakable impression that is conveyed is that once the duty of parading homilies has been fulfilled, they can be easily dismissed as bearing little or no relationship to life.  Gandhi experimented for the greater part of his life with toilets that would work with little or no water.  One display in the Aga Khan museum complex is entitled “bhangi mukti” [freedom for the scavenger], but the lower half of the exhibit has been wiped out; the following panel, on the subject of “Cleanliness and Public Hygiene”, is one big blur. 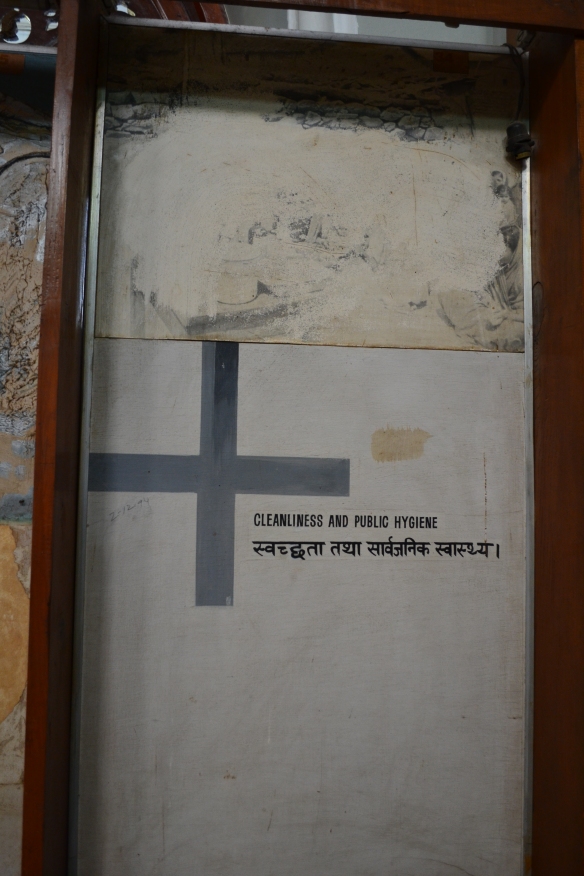 The slate of Gandhi’s teachings on cleanliness has been wiped clean!  Photo:  Vinay Lal, March 2016.

Perhaps there is nothing accidental here: notwithstanding the hullabaloo over ‘Swacch Bharat’, the country has for decades blotted out the very idea of public hygiene from its consciousness.  V S Naipual had something nasty to say about this years ago, and however intolerable he is on most occasions, he had the gift both of observation and of writing.  But he was, not unexpectedly, roundly derided for reminding everyone of the shit that mars nearly every Indian landscape.  India, let us recall, holds—and by an exceedingly large margin—the world record for open defecation.  But there is something else about these paintings and displays that grabs the eye. Gandhi, even as he wrestled with issues of the greatest gravity, was always supremely attentive to the minutest details.  Here, at a museum dedicated to his life, the aesthetic sensibility is entirely lacking; not one frame or exhibit suggests any interest on the part of the curators, caretakers, or administrative staff in the extraordinary legacy that is under their charge.  The entire Palace and museum complex reeks of decay, indifferent, and neglect.

The shocking state of disrepair in which the Aga Khan Palace—a monument, let us reiterate, dedicated to the nation both for its place in the struggle for self-determination at a pivotal stage, and as the site of events critical to Gandhi’s life—has been allowed to languish is not likely to excite anyone’s attention.  The hostility to Gandhi among the advocates of Hindu nationalism is palpable.  Considerable segments of the RSS have thought nothing of glorifying his assassin, Nathuram Godse, who not coincidentally was born in Pune District.  Whatever the culpability, which cannot be doubted, of previous local administrations, neither the present local nor the state government can be expected to have any interest in reviving an institution intended to celebrate the life of a man whom they view as guilty of appeasing the Muslims and weakening the Hindu nation.  The Government of Maharashtra is securely in the hands of a BJP-Shiv Sena combine; the Shiv Sena’s former leader, the late Bal Thackeray, was often heard deriding Gandhi as a eunuch.  It is also worth recalling that Pune is the site of the Bhandarkar Oriental Research Institute, a venerable research institution that was ransacked by Shiv Sena goons for none other than the reason that an American scholar, Jim Laine, had some years ago done research there to produce a book on Shivaji which his modern-day acolytes found to be inadequately reverential to their hero.  For those who pride themselves on the imagined glory of their martial traditions, a shrine dedicated to an effete Gujarati bania is just as soon forgotten.

At this rate, all that will be left of Gandhi is pigeon droppings.  This panel is illustrative of the condition of many of the displays.  Photo:  V. Lal, March 2016.

However, the country’s left intellectuals will not be rushing to register their dismay at the state of this monument either.  Nearly ten years ago, I wrote a piece in the Economic and Political Weekly entitled “The Gandhi Everyone Loves to Hate”, arguing that every constituency in India had a grievance with him.  In the intervening years, it has become almost obligatory to denounced Gandhi as a sexist and racist; and there are even websites that claim that he raped virgins and should have been jailed as a serial sex offender.  Some of his critics had been long been convinced that he had prevented the possibility of a “real” revolution—apparently, unless several million people have not been killed, or the enemy has not been exterminated in a calculated genocide, a genuine upheaval cannot be viewed as having taken place—in India, but lately we have also heard that his empathy for Dalits was nothing but a sham and that he even fortified the British empire in South Africa and India alike.  Arundhati Roy is, of course, much too smart and sophisticated to write a book with a title akin to something like ‘The Gandhi You Never Knew’, but the substance of her critique is effectively the same.  And that critique is nothing other than the stupid idea that the “real” Gandhi has been hidden from history.  If the state of the exhibits at the Aga Khan Palace suggests anything, it will not be long before Gandhi disappears altogether from public view.  Then India can celebrate its “real” independence and manhood.