Part IV of “Passions of a March–and of Gun Culture

The student-initiated “March for Our Lives”, two months old to this day, has already been characterized as a novelty in the annals of American political action.  History is, of course, always being ‘made’ in the United States: in a metrics-obsessed culture, this or that phenomenon—ten dunks in a single game by LeBron James, or the single-season rushing record in a NFL game, ad infinitum—becomes ‘one for the history books’.  The “March for our Lives” has doubtless made it to the history books as the expression of a certain sentiment involving a larger number of school students than any previously recorded movement of dissent—and perhaps this is all the more ‘historical’, if one is accepting of such a worldview, in that the present age is often described as one characterized by student apathy.  It may be that the noxious and equally nauseous politics of the Trump regime and its supporters has energized student bodies into political action.

It is well to remember, however, that “the march” is not a singular thing.  The “Long March” was itself comprised of several marches; most famously, it entailed the movement by Mao and fellow comrades from Jiangxi Province to Shanxi, a distance of some 4,000 miles across mountain ranges and two dozen rivers, over a period of 370 days from October 1934 to October 1935.  The stranglehold that Chiang Kai-shek had attempted to place around the communists was broken; the march would help to seal Mao’s ascent to power.  Gandhi’s march to the sea likewise may have done more than anything else to transform him into a world-historical figure, just as Nandlal Bose’s rendition of the Gandhi of the strident walk would yield one of the most iconic images of the Mahatma.  In its wake, came the Round Table Conferences:  whatever their place in the narrative of independence, and some have critiqued the conferences as clever stratagems on the part of the colonial power that deferred Independence for another fifteen years, the British for the first time sat down to negotiate with Indians.  Numerous marches have sought to reconfigure the American landscape, none more so than the 1963 “March on Washington for Jobs and Freedom”, which itself demonstrably took a page out of Gandhi’s march to Dandi.  A quarter of a million were gathered to hear some of the stalwarts of the Civil Rights movement; none present there had any anticipation of the soaring speech that King was about to deliver.  Less than a year later, the Civil Rights Act, inarguably the most transformative piece of legislation in modern American history, was passed. 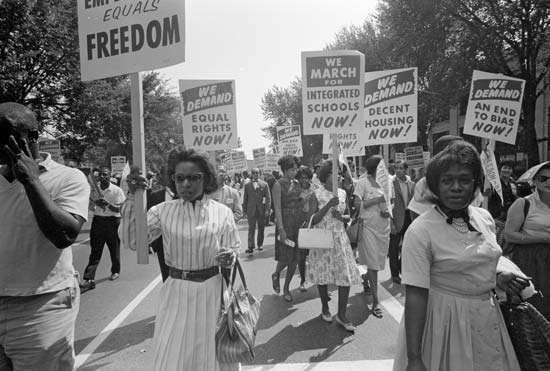 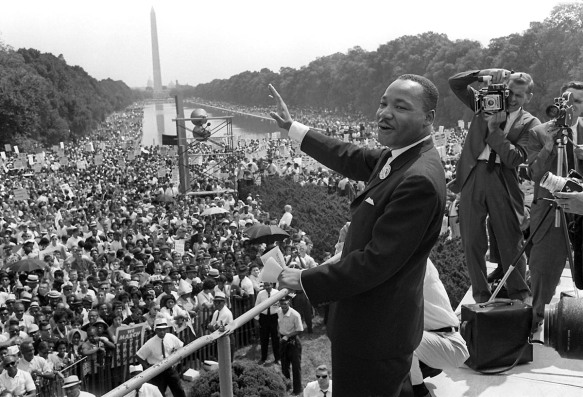 Martin Luther King, Jr. waving to supporters from the Lincoln Memorial at the March on Washington, 28 August 1963.  Source:  AFP/Getty Images.

The most recent “March for Our Lives” cannot be likened to any of these marches, and yet it has earned the moniker of a “march”.  Will it, in time, be similarly transformative and thus be deemed historic?  Few remember today the Million Mom March, held on Mother’s Day in 2000, when an estimated 750,000 women and men converged in Washington in support of gun-control legislation following a shooting at a Jewish Community Center in Granada Hills, California.  Another 250,000 people then took part in sister marches held simultaneously around the country.  The legislation that may legitimately be described as having in part emerged from this activism, the Brady Handgun Violence Prevention Act (November, 1993), mandated federal background checks on firearm purchasers and imposed a five-day waiting period for purchases, though the latter provision was rendered obsolete by the introduction in 1998 of the National Instant Criminal Background Check System (NICS).  The NRA, expectedly, offered stiff resistance to the Brady bill; its defeat, at that moment, was roundly celebrated as a demonstration of the fact that dents can be made in the NRA armor.

The Brady Act, however, did nothing whatsoever to put into question “the gun culture” that occupies an immense space in the American imaginary.  The long-standing and militant Executive Vice President of the NRA, Wayne La Pierre, is scarcely the only exponent of American exceptionalism, and believes with many of his countrymen and women “in America as the greatest nation on earth”; but he is also certain that America’s greatness owes everything to the Second Amendment, and that gun owners were critically important in handing Hilary Clinton an unexpected defeat.  Clinton is far from being an enemy of the Second Amendment; much like the students who marched on Washington, she believes only in sensible gun control—though, it is necessary to state, gun control laws in most nations are far more stringent than anything that could be contemplated under the rubric of “sensible gun control” in the United States.

The NRA has absolute mastery over this domain: it defines, names, and maims its enemies, except that its enemies are merely somewhat more reasonable more human beings, and nothing like the radicals who, as the NRA claims, are determined to take America down and strip its citizens of their cherished freedoms.  Apart from all this, it should not be forgotten that the provisions of the Brady Act continued to be whittled down, and the NRA successfully and relentlessly waged battles to augment the rights of gun owners in other respects.  As the events of the last twenty-five years have amply shown, the Brady Act has been rendered toothless; one study, based on an exhaustive study of data from 1985 to 1997 at the National Center for Health Statistics, concludes that the Brady Act may have done something to reduce suicide rates among those who are 55 years or older, but that it had no impact nationally on homicide rates or even suicide rates for those under 55 (see Jens Ludwig and Philip Cook, “Homicide and Suicide Rates Associated with Implementation of the Brady Handgun Violence Prevention Act”, Journal of the American Medical Association 284, no. 5 (2000), 585-91.

Part III, The March for Our Lives:  A New Generation of Activists?

Part II, School Shootings, the Lockdown, and an Aside on Masculinity