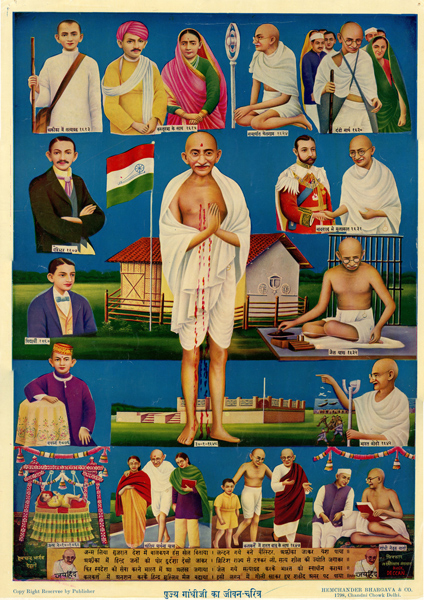 One more Gandhi Jayanti [Birth Anniversary: October 2nd] has gone by and the thought that occurs to me is this:  just how was the life of Gandhi conveyed, in his own lifetime and in the aftermath of his death, to his countrymen and women, across towns and in India’s hundreds of thousands of villages?  What did they, who could not read, know of his life in panchayats and little hamlets?  Did the Patuas or Chitrakars move from village to village and unfold the panels of their scrolls and so make vivid the episodes drawn from Gandhi’s life?  If they did so, the scrolls appear not to have survived.  There is something suggestive, in this regard, about a touching scene in the classic movie, Garam Hawa:  the workers at the shoe factory of Mirza Sahib are gathered around a man who reads from a newspaper an account of Gandhi’s assassination.

There may thus have been many modes by which the life of Gandhi was put into circulation and the mind instinctively turns to biographies.  Of biographies of Gandhi there is now no end, and each generation, so says Ramachandra Guha in justification of yet another life of Mohandas, needs its own Gandhi.  India sent us Mohandas, Mandela is reported to have said, and we sent back a Mahatma, and it is in South Africa that the first slim biography of Gandhi was penned.  Many of the biographies that followed are, as befits an epic life, gargantuan in scope.  There was, at first, D. G. Tendulkar’s Mahatma in 8 volumes; various volumes by Pyarelal appeared at a leisurely pace over the course of a few decades. But these works were published many years after independence, as is true of something like 700-800 biographies of Gandhi in English alone.

Anthologies of Gandhi’s writings began to proliferate around the mid-1920s, and his own ‘lieutenants’, most famously Mahadev Desai and later Pyarelal, were quick in bringing out systematic narratives of his satyagraha campaigns. The two volumes of Gandhi’s autobiography, written in Gujarati and rendered into English by Mahadev, appeared in 1927 and 1929, but the autobiography takes the story of his life only to the early 1920s. Gandhi’s writings began to be disseminated by Navajivan Trust, a publishing house that he had established in 1929, but nevertheless it is unlikely that most Indians would have become acquainted with the contours of his life through published works.

By the early 1920s, print makers, working out from a number of cities, among them Delhi, Kanpur, Allahabad, Lahore, Calcutta, Madras, and Bombay, had begun to take the narrative of the nationalist movement to the masses.  These prints may have been passed from one hand to another; they may have been framed and placed prominently in homes, but it is also likely that they were affixed to walls, doors, or poster boards in public spaces.  Gandhi figured prominently in these prints, many shaped around the non-cooperation movement, the Salt Satyagraha, or the teachings with which he became associated on subjects such as the constructive programme, swadeshi, and the economic impoverishment of India under colonial rule.  One of the more striking of such prints, from the Delhi-based Hemchander Bhargava & Co., takes as its subject the totality of Gandhi’s life, from cradle to ‘martyrdom’, and offers cues on how Gandhi’s life was stitched into the fabric of the nation. 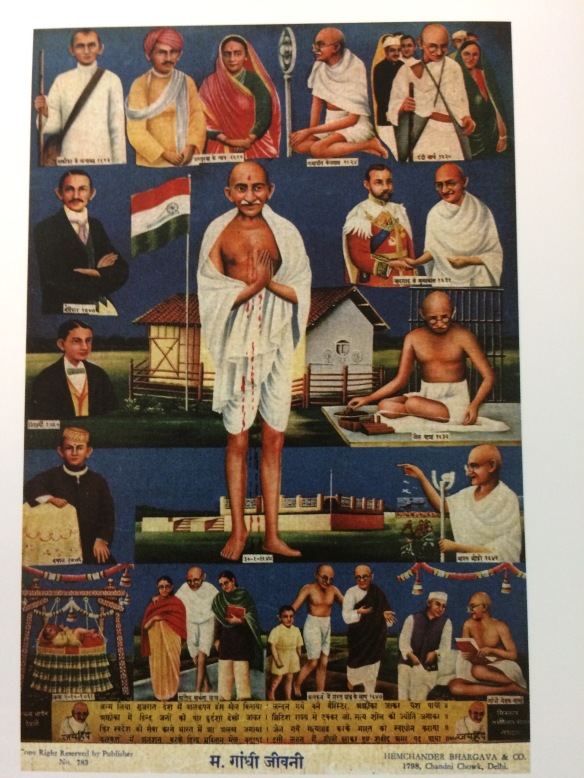 Fig. 1a:  “M. Gandhi Jivani”, that is “The Life of M. Gandhi.”  This is a variation of Fig. 1: the print is identical, except for the fact that the background blue is a darker shade of blue, and the longer caption of Fig. 1 has been replaced with a shorter and less ornate caption.

Entitled “Poojya Gandhiji ki Jivan Caritra” (The Life Story of Revered Gandhiji; fig. 1), the print invites the viewer to read Gandhi’s life through rites of passage or critical events.  The narrative commences at the bottom left with the infant Gandhi; moving along a vertical axis, the viewer encounters him at various stages of schooling in his native Gujarat and England before he arrived in South Africa as an attorney.  It is there that he developed the idea of nonviolent resistance:  in doing so, he stripped himself of his Western clothes and donned the garb of a satyagrahi.  As the viewer moves along the horizontal axis at the top of the print, the next phase of his life is vividly brought to the fore.  In 1915, Gandhi returned to India with Kasturba, and campaigns at Champaran and Kheda acquainted him with the conditions of Indian peasantry.  By the mid-1920s, Gandhi was preoccupied with the constructive programme, and finally in 1930 he launched the next phase of mass nonviolent resistance with the Salt Satyagraha.

The viewer, at this point, moves vertically down the right side of the print.  Gandhi made his way to London for the Round Table Conference to negotiate the terms of India’s future; he also met with the King-Emperor. In the mid-1930s, he installed himself at an ashram in central India.  Visitors to his ashram almost invariably found him spinning. He appeared to have withdrawn, once again, from the struggle for political emancipation; however, the print can also be read as inviting the viewer to reflect on the relationship of political independence to economic independence and social change in Gandhi’s thinking.  He launched the final phase of the freedom struggle with the call for the British to ‘Quit India’.  With this, the print-maker turned to some of the people who filled the last years of Gandhi’s life:  Nehru, children, and his grandnieces Manu and Abha.  The two young women were his constant companions and sometimes dubbed his ‘walking sticks’.  Finally, Gandhi’s life is brought to a close with his assassination:  the martyred Gandhi is placed squarely in the center of the print and both dominates and anchors the entire narrative. 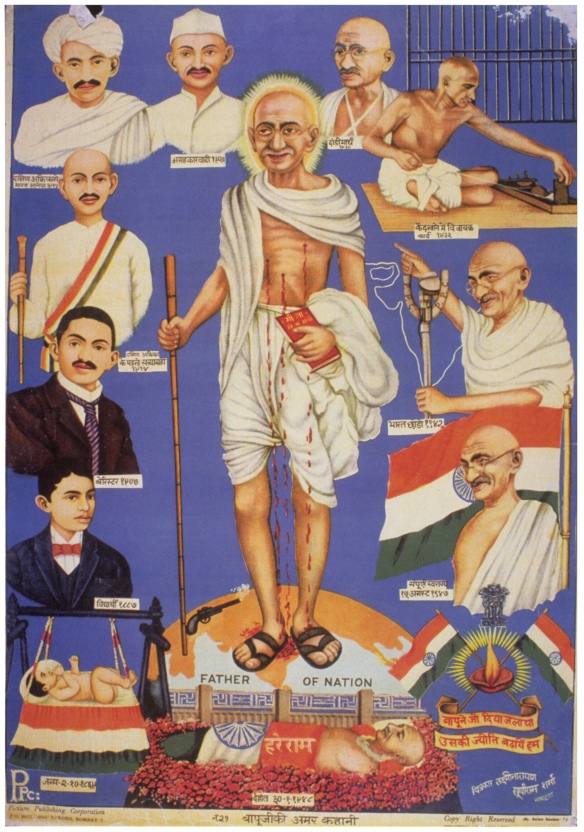 Fig. 2:  “Bapuji ki Amar Kahani”, the Immortal Story of Bapuji.  This artist is described as the Chitrakar Lakshminarayan Sharma, and the publisher is Picture Publishing Corporation, Bombay.

Other similar prints of Gandhi’s life story circulated as well.  From Picture Publishing Corporation in Bombay we have a print, created by Lakshminarayan Sharma, with some significant, indeed extraordinary, variations (fig. 2).  The narrative is structured in a like fashion, but the Indian tricolor, which is noticeably missing in the first print, occupies a good portion of the lower third of Sharma’s print and offers a different framing device.  The baby’s cradle is draped in the tricolor, as if to suggest that Gandhi was ordained from birth to lead the country to freedom; on the bottom right, Gandhi foregrounds the flag and the words, ‘Sampurna Swaraj, 15 August 1947’, suggesting that he successfully shepherded the country to its destiny.  Most significantly, Gandhi lies in complete repose, his body adorned by the tricolor.  The script at the bottom enumerates the date of his death; the smoking gun suggests that the satyagrahi met a violent end.  “He Ram” are the words that Gandhi is thought to have uttered as the bullets pierced his body and he fell to the floor, but both the assassin, Nathuram Godse, and his younger brother Gopal would dispute that Gandhi said anything at all.  The text to the right, “Bapuji Ne Diya Jalaya / Uski Jyoti Barayen Hum” (‘Bapuji lit the flame, It is for us to further that light’), read in conjunction with his draped body and the globe that he has conquered with his stride suggests not only that Gandhi has merged into the nation but that he belongs to the world.

There is much else that is captivating in Sharma’s print, but it is in the juxtaposition of the two prints that we can discern what is remarkably different in openly pronouncing Gandhi the “Father of [the] Nation.”  I have had various occasions to remark, elsewhere in my published work, that Gandhi was just as much Mother to the Nation as he was Father of the Nation.  It is not even remotely accidental that Manu’s greatest testimonial to Gandhi is a little book called, Bapu, My Mother.  The print from Picture Publishing is, if we may put it this way, far more masculine in its sensibility and representational apparatus. It excises not only Kasturba, who was Gandhi’s life companion for something like 60 years, from the narrative but all women.  One can dispute the degree to which Gandhi was comfortable with idea of women’s complete autonomy, but it is inarguably the case that Gandhi played a critical role in bringing women into the public sphere.  There is not a hint of this in Lakshminarayan Sharma’s rendering of Gandhi’s life story (fig. 2).  The Bhargava print (fig. 1), by contrast, is sensitive to the place of women in Gandhi’s life, and in its recognition of the role of women in the Salt Satyagraha it offers more than just an affirmation of how women came into the freedom struggle. Gandhi sought not only to liberate India from colonial rule but to emancipate politics from its association with an unforgiving masculinity.

A biography is seldom only a chronological narrative of a person’s life; these prints are no exception.  We may, in conclusion, take a few illustrations of how the print from Hemchander Bhargava’s workshop seeks to offer a decisive interpretation of Gandhi’s life.  It is attentive, for example, to the sartorial Gandhi:  as we encounter Gandhi along the different stages of his life, we find him stripping himself of clothes and trying, in his own words, to reduce himself to zero.  Of Gandhi it can be said that he commenced his adult life vastly over-dressed and ended it, by the reckoning of some, vastly under-dressed.  His dhoti and shawl are not just blood-stained; blood drips down.  The nation, too, has been stained by the dastardly act of the assassin; the country is drained, dripping with the blood of the innocents.  The loss of blood points to the sacrifice of the Mahatma, but was this sacrifice in vain?  Was the martyrdom of Gandhi necessary so that he could begin life anew?

(First published in a shorter version in the Hindu Sunday Magazine (6 October 2018) as “The Imprint of a Man’s Life”; the online version called “Gandhi and the Printed Image” can be accessed here: https://www.thehindu.com/society/gandhis-story-in-images/article25113640.ece)