Part II of The Trouble with Kamala:  Identity and the Death of Politics

Those who do not recognize the manner in which identity politics dominates nearly all conversation in America understand little if anything of America.  What the nomination of Kamala Devi Harris by the Democratic party to the Vice-Presidency of the US signifies is not so much the fact that women have finally arrived on the political scene, or are on the verge of breaking the glass ceiling that has held them back, an argument that was advanced when Hillary Clinton became the party’s nominee for the President, but rather the sheer impossibility of escaping the identity question in American public life.  Let us consider her, in the first instance, as an African American as Harris has herself weighed in on these matters often, describing herself as a Black on most occasions and adverting to her pride in being African American. Her 2019 autobiography, The Truths We Hold: An American Journey is explicit on one particular detail that merits some consideration.  Her parents separated when she was around five years old, and they divorced a few years later; but her mother, who had come from India as a graduate student, was not therefore bereft of a family. Kamala’s parents had a shared political life for some years:  they participated in political demonstrations against racism, discrimination, and injustice, discussed decolonization in Africa, and declared their support for liberation movements in ‘the developing world’.  These dissenters and rebels became, Harris writes, “my mother’s people.  In a country where she had no family, they were her family—and she was theirs.  From almost the moment she arrived from India, she chose and was welcomed to and enveloped in the black community.  It was the foundation of her new American life.”  In consequence, Shyamala Gopalan raised her daughters, Kamala and Maya, as black children:  “She knew that her adopted homeland would see Maya and me as two black girls, and she was determined to make sure we would grow into confident, proud black women.” 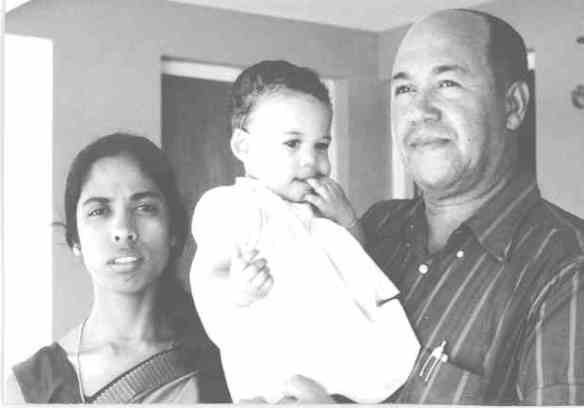 A baby Kamala Harris with her mother, Shyamala Gopalan, and her paternal grandfather, Oscar Joseph, during a visit to Jamaica. (Courtesy of Kamala Harris)