With the passing of Ranjith Kally in Johannesburg on June 6, apartheid-era photography has lost one of its stalwarts. From his appointment in 1956 as a photographer to Drum, a magazine which Bob Crisp and Jim Bailey launched in 1951 as a vehicle for the expression of black urban life, until his retirement in the mid-1980s, Ranjith Kally worked assiduously and yet creatively to furnish a record that is nearly without equal of the racial element in South African life and, just as importantly, of both the heroic and everyday transgressions of the insidious racial boundaries that make South Africa’s struggle against apartheid one of the most arresting chapters in the modern history of the triumph over oppressive adversity.  His sprawling oeuvre is a veritable library of what are now recognized as iconic snapshots of the principal political and artistic figures who brought the struggle in South Africa to the world’s attention.  But Kally was equally a chronicler of Indian life in and around Durban, working-class culture, the politics of the street, and the quotidian element in the social lives of South Africa’s black, colored, and Indian communities.  His camera was to become an object lesson in how one might begin to understand the extraordinariness of the ordinary. 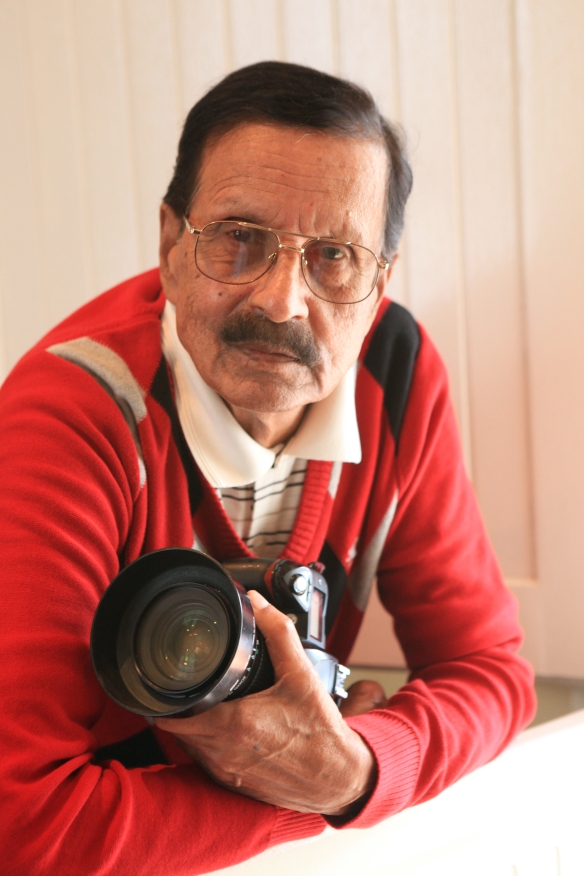 Kally was born in 1925 in Isipingo, which lies just south of Durban and had been a ‘whites only’ area before it was reclassified as Indian.  His grandfather had been among those who had worked on the sugar plantations; his father, Kallicharan, was similarly born into this work, leaving for the fields at 3:30 am where he executed his duties as an overseer.  One of Kally’s earliest and most moving photographs is of his father poring over a Sanskrit text:  reproduced in Kally’s Memory Against Forgetting (2014), it conveys an impression of his father as a learned man rather than as a farm worker.  His father is foregrounded against a black sheet, which accentuates the early morning light; as Kally was to write, “I had wanted to use an old book which he would read often and this is the pose by which I’ve come to remember him.” 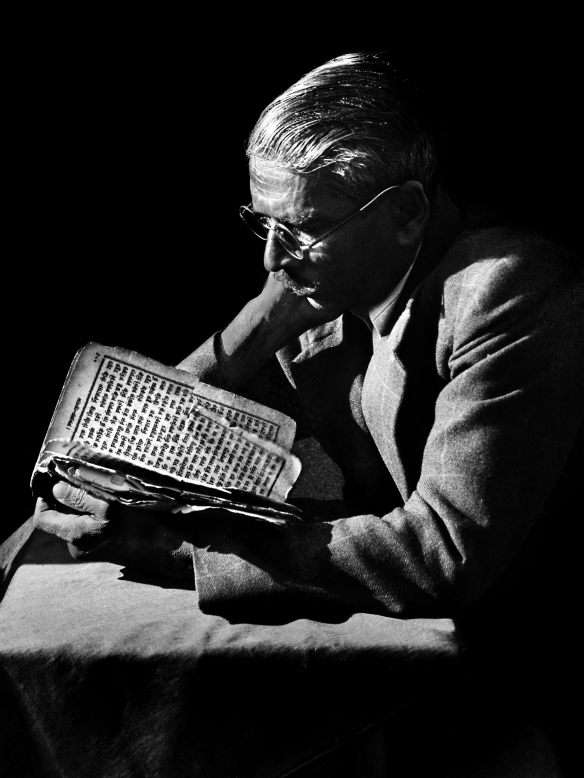 Kally walked the three kilometres along a dirt road to school every day.  Schooling among Indian and black school-children seldom extended beyond adolescence in his days, and Kally took a position in a shoe factory after finishing standard six.  Meanwhile, a Kodak Postcard camera, which Kally had picked up at a jumble sale, had spurred his interest in photography, and after a part-time stint at the Durban-based newspaper The Leader, Kally assumed a paid position with Drum and the Golden City Post.  Sometime, perhaps in the early 1950s, a photograph by Kally was selected in a competition sponsored by the Japanese firm Pentax for third prize among 150,000 entries.  (However, in an interview that Kally gave to my friend, the historian Goolam Vahed, on 9 February 2016, he placed this event in 1957; however, in the introduction to Memory against Forgetting, as well as in The Indian in Drum, by Riason Naidoo, the competition is described as having taken place in 1964.)

Kally’s first photographs of anti-apartheid figures would be taken in the late 1950s.  At a break during the Treason Trial in Pretoria in 1958, the young photojournalist saw his opportunity.  Among those on trial were Monty Naicker, a doctor who turned to trade union activism before assuming leadership of the Natal Indian Congress and offering the NIC’s cooperation in the Defiance Campaign.  Monty played a key role in making possible the close cooperation between Africans and Indians that would signal the solidarity that would mark the distinctiveness of the anti-apartheid movement.  In his photograph, Monty commands the center; a young Nelson Mandela and the communist leader Yusuf Dadoo are in the background. 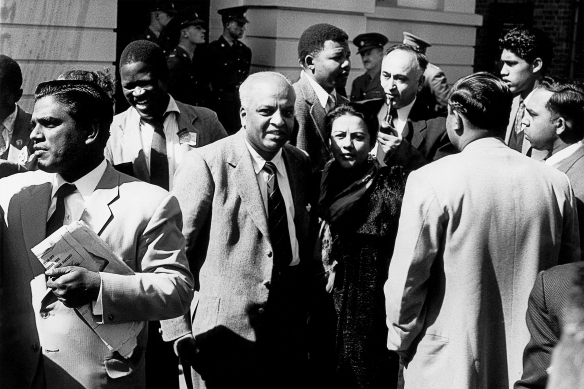 Monty remained among Kally’s favorite subjects, and he was one of the Indian political leaders who was featured regularly in Drum; but Kally’s proximity to the Indian community, and his own awareness of the political moment, led him to other Indians who were staunch advocates of racial solidarity.  A photograph from the 1970s shows the attorney Phyllis Naidoo who engineered the escape of many prominent anti-apartheid activists:  taken at her offices in Maseru after she had herself gone into exile, a pensive Naidoo reflects on her narrow escape from an assassination attempt.

Kally would capture, in a series of striking photographs, the travails of the Meer family.  In the early 1960s, Ismail Meer, then in detention, sought a portrait of his wife, Fatima, and their three young children to keep him company in his prison cell.  In Durban’s Botanical Gardens, Kally seated Shamin, Shehnaaz, and Rashid around their buoyant-looking mother.  There is no hint here of anxiety, fear, or the oppressiveness of racial terror.  Less than twenty years later, Kally would snap a photograph of Fatima Meer, a gigantic figure in the struggle in her own right, emerging from a courtroom with steely determination flanked by three lawyers who represented her as she sought to fight the repressive apparatus of the state.  Taken together, the two photographs do not only point to the passage of time:  writ large there is the tale, inter alia, of women assuming a place in the public sphere, the many guises of the political, and the little-discussed role of Indian Muslims in shaping secular narratives of freedom. 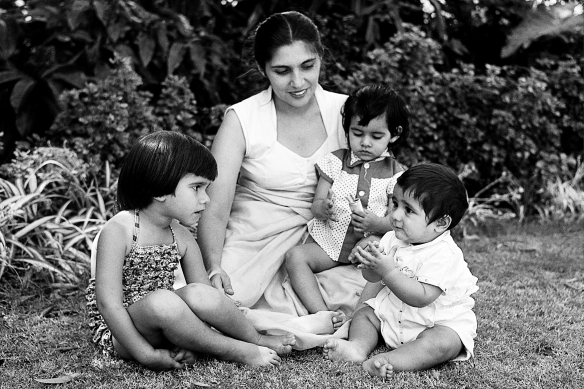 However, for reasons that likely tell us something about Kally’s own political disposition, it is above all the figure of Albert Luthuli, the leader of the African National Congress, to which he was likely most drawn.  Kally was despatched to Groutville in 1961 when the news of the award of Nobel Peace Prize to Luthuli, who was under a banning order, was made public.  Kally photographed Luthuli against a rustic window frame, looking out at what is perhaps an uncertain future.  He is dressed in a workman’s overalls—rather apt, if we consider that he was a man of the people.  The frame tells its own story, of a man who had been framed by the state.  We may say that the framing device surfaces elsewhere in a different register, as in Kally’s photograph of a peace rally where a handful of men are holding aloft a huge photograph of Luthuli—a photograph also taken by Kally.  It is perhaps fitting that Kally concludes Memory Against Forgetting with a facial portrait of a smiling Luthuli who never stooped to the level of his opponent while reminding his readers that “as we celebrate freedom, we would do well to equally remember the legacy of the other great man of peace, Inkosi Albert John Luthuli.  While Madiba taught us how to forgive, Chief Luthuli first taught us how to love.” Chief Albert Luthuli:  photograph taken of him in Groutville after he had been informed of the award of the Nobel Peace Prize.  Copyright:  Ranjith Kally

Ranjith Kally was 91 years old when he passed away.

Note:  I met Ranjith Kally thrice on my second trip to South African in November 2015.  I was keen on doing an exhibition of some of his works and arranging for him to visit UCLA.  But, alas, I was too slow in moving things along. Kally was kind enough to share with me high resolution images of some of his work; the photographs here are all under copyright with him and his heirs.  This part first of my tribute was published in The Mercury South Africa as “Photographer’s oeuvre a vision of urban black life” (14 June 2017, p. 7).

Join 820 other followers
Follow Lal Salaam: A Blog by Vinay Lal on WordPress.com