Jeremy Seabrook, an independent writer, journalist, and chronicler of the human condition who has long had an interest in South Asia, probing especially the lives of those who inhabit India’s slums and Muslim ghettos, turns his attention in his most recent book to the workers of Bangladesh’s garment industries who clothe the world but, like the weavers of Bengal in colonial India, barely have enough to cover their own nakedness. The book takes its title from Thomas Hood’s elegy on the women workers in Lancashire’s textile mills, “The Song of the Shirt” (1843):  working “in poverty, hunger, and dirt,” moving their fingers to the command of “Stich! Stich! Stich!”, they sowed at once, “with a double thread, A Shroud as well as a Shirt.”

If Bangladesh has emerged at all in the news in recent years, it is on account of the disasters that have befallen its garment industry, none as calamitous as the collapse of the Rana Plaza commercial building under whose debris over 1,100 people were left dead.  Seabrook’s book is a searing indictment of the callousness of factory owners and others in the global system of the circulation of capital who are complicit in creating miserable working conditions for those employed in Bangladesh’s largest and most profitable industrial venture.  Yet it is also an extraordinary tribute to the workers who pile into Dhaka and other centers of the garment industry from all corners of the country.  Their lives are sketched not so much in detail as in poignantly suggestive prose.  Do people flee to that “washed out concrete jungle” that is called Dhaka, which Seabrook unflinchingly describes as one of the world’s ugliest cities, to escape the narrowing of human possibilities that Marx sought to capture in his brutal condemnation of the “idiocy of the rural countryside”?  One might suppose that it is the aspiration to become something in life, or merely to earn a livelihood, that brings people to the city from the interior, but what would then make the story of Bangladesh so distinct?

The recent migrants coming into Dhaka “bring the sincerity and artlessness of rural life—qualities ripe for transformation into exploitable labour” (37); yet the city where they arrive with such hope becomes another prison, reduced as they are to 12-hour working days in window-less rooms and under the watchful eyes of cruel taskmasters.  But the specificity of their stories is to be derived from the particular conditions which push them to the city—the loss of ancestral land, the inability to feed too many mouths, the need for money to secure a dowry for a sister, and so on.  Perhaps more than anything else, Bangladesh is a land dense with rivers and scarred by cyclones.  The rivers are teeming with fish but the river is also “thieving” and “hungry”; when the Meghna overflows, its ravenous maw swallows up whole houses, agricultural land, and people (105-9). 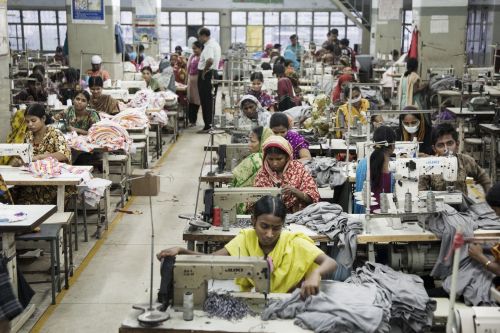 In this short yet compelling book, Seabrook skillfully weaves together tales of peasants with stories of weavers, moving back and forth between the village and the city, water and land, lush green fields and the ramshackle appearance of South Asia’s urban patches, even the poetic and the idioms of history.  He is versed in historical sources but not burdened by them; and only someone with the sensibility of a poet can ruminate on the strange interplay of fire and water that has shaped the contours of the lives of his subjects.  Water, in the form of “tidal surges, cyclones and floods”, has “always been the most usual element that brings death to Bangladesh” (29); the villagers flee this menace to arrive as laborers in the city’s garment factories, often to be consumed by the fires that have time and again struck the garment industry’s ill-regulated factories and warehouses.  One might have thought that water fights fire, but in Bangladesh the two often collude—as if the poor did not have enough wretchedness in their lives.  There are other desultory facts, almost poetic bits, that take the breath away:  who would have thought that Murshidabad, once the world centre of silk weaving and now a haunted culture, perhaps once accounted for “5 percent” of the world’s total product (176-77)?

The Song of the Shirt, writes Seabrook, “is a reflection on the mutability of progress.”  The dominant narrative of human progress presupposes “a deterministic and linear process,” but Seabrook insistently reminds us that “experience in the clothing and fabric industry suggests certain areas of the world are liable to periods of industrialization, but equally to de-industrialization” (17).  The most ambitious aspect of Seabrook’s intellectual enterprise, and not surprisingly the one that is most fraught with hazards of interpretation, is his attempt to suggest the various ways in which Bengal and Lancashire offer a mirror image of each other.  The demise of the weaving industry in Bengal under colonial rule “coincided with the rise of the mechanized production of cotton goods” in the greater Manchester area; even as Dhaka became a ghost town, “Manchester became the centre of intense economic dynamism”.  Lancashire is now utterly denuded of its textile mills, and Manchester has lost population; but, in “a ghostly replay of traffic in the other direction” of “the machine-made clothing” that wiped out Bengal’s famed spinners and weavers (17), Dhaka with its 2500 garment factories has become nearly the epicentre of the world’s manufactured clothing.  Seabrook invests much in this comparison, constantly suggesting similarities between 19th century Britain and contemporary Bangladesh with respect to the lives of the workers, the nexus between the state and manufacturers, working conditions, and much else.

One might be moved, by Seabrook’s comparisons, to accept that widely quoted French expression, “the more things change, the more they remain the same”.  But this temptation must be resisted, if only because a sensitivity to the politics of knowledge should introduce some caution in comparisons between Europe’s past and the global South’s present.  Nevertheless, in Song of the Shirt, Seabrook has accomplished the enviable task of rendering naked the social processes which have helped to clothe the world and disguise some unpalatable truths about the treacherousness of what is usually celebrated as entrepreneurial capitalism.