I opened the newspapers on May 24th to two disconcerting even stupefying stories that are wholly unrelated and yet, to my mind, seem strangely if not inextricably linked in several ways.  Both stories captured the world’s attention, if for altogether different reasons.  In India, the incumbent Prime Minister, Narendra Modi, had not only retained his seat in Varanasi by a huge margin but he had led his party to a crushing and decisive victory over his political foes, scattering his opponents like atoms in the dust.  The Indian Express’s chief political columnist, Pratap Bhanu Mehta, headlined the achievement of Modi with the phrase, “Staggering Dominance”.  Some in the media spoke of his “landslide reelection”, while others described the unambiguous “mandate” he had received from the country. 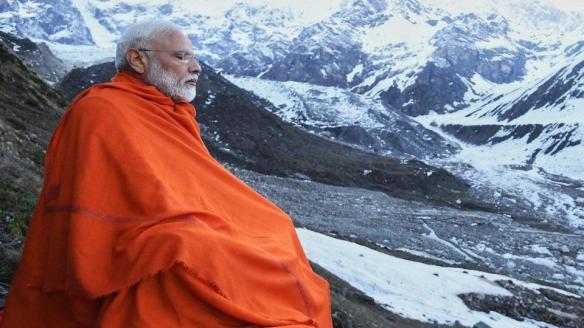 The Tweeting Yogi: Narendra Modi meditating at Kedarnath. He tweeted this image, just before the conclusion of the elections. Source: Hindustan Times.

END_OF_DOCUMENT_TOKEN_TO_BE_REPLACED

Join 821 other subscribers
Follow Lal Salaam: A Blog by Vinay Lal on WordPress.com