The story of the anti-apartheid struggle is not only one, or even mainly, of ‘great figures’.  Kally’s probing and incisive camera is sensitive to the transgressive moments that periodically signified that the enclosures that apartheid sought would be broken by those animated by the quest for equality and social justice or otherwise willing to take risks.  One of Kally’s most stunning photographs, which he has described as a “scoop at the time”, shows a dazzling Rose Bloom hand-in-hand with Syrub Singh as they leave the court after a bail hearing.  I am tempted to say that true love is almost always “forbidden”, but in South Africa the anti-miscegenation laws were particularly severe; moreover, the idea that a white woman, the holiest of the holies, might desire to marry a coloured man was absolute anathema to white society.  Ms. Bloom’s offense is compounded:  she wears a sari and has thus gone native or rather ‘Indian’.  Mr. Singh looks pleased as punch, though some might say that he is clearly smitten. 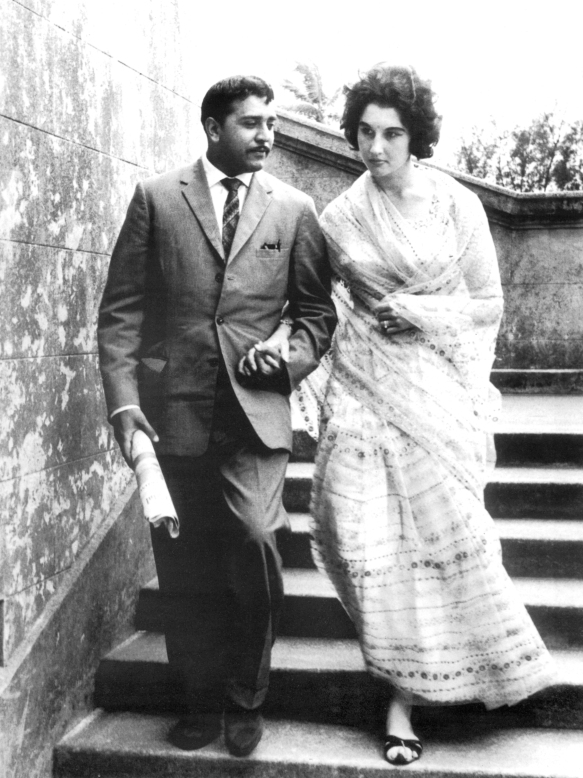 Syrub Singh and Rose Bloom emerging from the magistrate’s court after a bail hearing.  Photograph and Copyright:  Ranjith Kally

Others, of greater fame, too committed the sins of sexual transgression.  Those who know something of Miriam Makeba remember her marriages to trumpeter Hugh Masakela and the African-American activist Stokey Carmichael.  But the first of Miriam Makeba’s several marriages was to the balladeer Sonny Pillay—and Kally was there to capture those short-lived moments of tenderness even as the Indian community fumed. In his flat, where he had asked them over one evening, Kally recorded their “wonderful chemistry”:  Sonny looks over Miriam’s shoulder at a magazine or LP record sleeve, and the two are a picture of youthful love and exuberant joy.  Kally evidently spent many an evening at The Himalaya Hotel in Durban’s Casbah area, one of the few places in Natal where segregation was not rigidly enforced and blacks, whites, and coloured people mingled.  But Kally’s roving eye camera found the transgressive in other milieus, often far more dangerous. One of the resistance movement’s most iconic images must surely be the photograph that Kally took of Florence Mkhize, later to be known as “Mama Flo”, as she burnt her passbook during the Defiance Campaign.  Acts of resistance to the prescribed social and political order rarely led to anything but an unhappy ending.

What is remarkable about Kally is that he remained attuned to the vicissitudes and vagaries of the political over the course of several decades culminating in the end of apartheid.  What is just as striking in his large and still largely unknown body of work is his attentiveness to the quotidian or the everyday life of Indians in and around Durban.  But let it first be said that he was not alone in documenting their lives, as Riason Naidoo’s 2008 book, The Indian in Drum Magazine in the 1950s, unequivocally demonstrates.  Close to half a decade after the end of the indentured system, the greater majority of Indians still lived below the bread line.  The Drum photographer and Kally’s estimable contemporary, G. R. Naidoo, spent one afternoon in 1952 at the one-room shack of the Pillay family in Clairwood South to bring home some bare facts of life at the margins.  Pillay had many mouths to feed, apart from himself:  his wife, his mother, and his five daughters shared a grim existence where the next meal was remote from certainty.  In one photograph, Mr. Pillay is seen emerging from a storefront where a large sign reads, “No Vacancies.” The caption below the photograph states, “In spite of the sign outside Mr. Pillay tried for work.  They told him:  ‘Go away. Can’t you read?’”  The hard-working persistence of the Indian under-class would, in India, South Africa, and elsewhere in the Indian diaspora ironically earn them the epithet, “The Lazy Native”.

The question, then, is whether Kally’s lucid camera gaze inflects the quotidian with a different sensibility.  In one photograph, an Indian woman scrubs dishes outside a group of shacks; a very young girl, clutching a toddler, stands by her side.  In another picture, a woman and two young women scrub clothes in an open field.  These are pictures of poverty and they may be construed as ethnographic studies.  There is sometimes despair in his representations of Indian life yet it seldom overwhelms the viewer.  His 1957 photograph, “Children gotta work”, is illustrative of not only Kally’s approach to the grittiness of Indian life in Natal but of the self-reflexivity in much of his work.  Four Indian children, some unmistakably teenagers, are on their way to work in the fields.  Shovels are flung across their shoulders; two of them firmly grasp lunch boxes in their hands.  They walk barefooted in the morning light.  The photograph seems familiar, and why not?  It resonates with pictures of the Indian partition, where the columns of refugees were monstrously large, but there are also shades of the historic march of Indian miners from Natal to the Transvaal in 1913.  Workers on the move, the daily walk, the look of determination:  all this is part of the ensemble.

An Indian woman scrubbing dishes, in a village on the outskirts of Durban.  Photograph copyright:  Ranjith Kally.

I didn’t know Kally well enough to aver that he was a man of sunny optimism, but his photographs nevertheless suggest an eye for the whimsical and a zest for life.  The whimsical touch is nowhere better captured than in his photograph of a boy with a large tortoise on his head.  The wide grin on the boy’s face reveals the unmistakable fun he is having in ferrying his slow-moving companion. I wonder if Kally–and the boy–knew that in Indian mythology, the tortoise carries the weight of the world on its back.  Tortoises can live well past 200 years: in a piece I wrote some years earlier, I looked back, whimsically, on the death 250 years later of the pet tortoise of Robert Clive, the conqueror of India.  Long after the sun set had set on the British empire, Adwaitya the tortoise was still there to help us reflect on the transience of what are touted as the great achievements of history.

Boy with a Tortoise.  Copyright and Photograph:  Ranjith Kally.

In South Africa, as elsewhere, the emergence of the ‘modern woman’ in the 1950s was becoming a subject of much discussion.  Kally’s snapshot of “Miss Durban 1960”, which is very much done in the vein of the pin-up girl poster that was the mainstay of the soldier’s barracks or the bachelor’s pad, points to the total ease with which Rita Lazarus embraced a bathing suit and her comfort with her own body.  The photograph is inviting without being salacious.  But perhaps the boldest expression of this element of joie de vivre, conjoined with the whimsical, in Kally’s work is his photograph, from the late 1950s, which he called “The Big Bump”.  ‘Pumpy’ Naidoo, owner of Durban’s Goodwill Lounge, bounced into Springbok Radio announcer McKay one evening at the Durban City Hall:  the two men, both amply endowed at the waist, rubbed against each other.  Each seems to be saying, ‘My tummy is larger than yours, and all the better for it.’  Ranjith Kally, I am certain, would have wanted to be remembered as much for this photograph as for any other in his capacious body of work.

[This second part was originally published in a slightly different version as “Kally’s captured works” on 19 June 2017 in The Mercury South Africa (p. 7).]