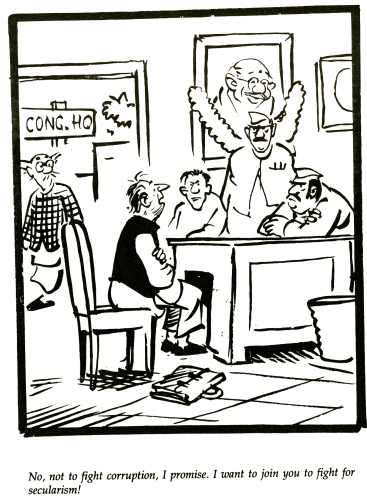 The popular Hindi film brings to mind the framed portrait of Mohandas Gandhi, ‘Father of the Nation’.  Hindi films are often described as formulaic, and perhaps not without reason:  their ingredients, many imagine, are utterly predictable, and indeed one of the pleasures of watching such films may reside precisely in the fact that often one is aware of the dialogue even before it has been uttered.  The plot generally holds no suspense, and that may be one reason why the Hindi film thriller is, barring an exception or two, still an anomaly.  Whatever the merits of the argument, I have been struck by something else in viewing hundreds of films over the years.  In the Hindi film of the 1960s through the 1980s, as in real life, one could almost always expect to find the framed photograph of Mohandas Gandhi, most often in the police station, the government office, or the receiving room of the senior politician’s headquarters.  Occasionally, one would encounter the framed Gandhi in the home of the pious teacher, the dedicated social worker, or the plain old-fashioned patriot.  The framed Gandhi, if one were to watch mainstream Hindi films from the decades of the 1960s to the 1980s with a modicum of attention, seems to have been nearly as essential to the Hindi film as songs, the staged fights (orchestrated by the ‘fight master’), or the suffering mother.  One might argue, of course, that the Hindi film was merely following the script set by the state:  the protocol apparently required that Gandhi’s photograph be hung visibly in the most prominent office of a government institution.

It is tempting to think that, from his lofty position on the wall, Gandhi is there to inspire men and women to do good; but perhaps he is also there to cast a look, as we shall see, at all that transpires in his name and under his photograph.  Though the ‘Father of the Nation’ did not much believe in surveillance, and was notoriously indifferent to considerations of his own security, eventually surrendering his life to an assassin who had absolutely no difficulty in penetrating the Birla House gardens where Gandhi held his evening prayer meetings, the framed Gandhi appears to peer down from his lofty position on mere mortals.  However critical one may be of Gandhi at times, even his worst enemies would have a hard time thinking of him as a ‘Big Brother’.   Even Gandhi’s authoritarianism, for such is how it is has been described by some of his critics, was tempered by a radical catholicity of thought.  Nevertheless, perhaps the framed Gandhi is there to remind the thinker or doer that Gandhi Baba’s eyes are cast at their deeds:  his blessings will be showered on those who act ethically and his admonitions will caution those who are set on the path of wrong-doing.  One can understand why Indian embassies and consulates throughout the world prominently display the framed Gandhi:  whatever India’s standing in any particular country, the name of Gandhi is calculated to earn India some goodwill.  Similarly, the person who puts up Gandhi’s photograph may be attempting to acquire cultural capital, suggesting to others that the admiration for Gandhi points to some element of nobility in his or her own personality.  If we are associated in people’s minds with the friends we keep, there is reason to suppose that the photographs of venerable elders on display are meant to signify something about us to others.

The gesture of the framed Gandhi can, of course, be read in myriad other ways.   It is customary for states to hang framed photographs of the highest officials – often elected, just as often self-appointed, as in the case of ‘presidents for life’, or otherwise chosen to preside over the destinies of their people – but Gandhi occupied an anomalous position in the immediate aftermath of independence, holding no office and yet being bestowed with the epithet of ‘Father of the Nation’.  But, in India, framed photographs of the gods and goddesses are even more common than the photographs of netas, ‘leaders’ of the nation.  Let us, for a moment, overlook the fact that many of those canonized or celebrated as netas have been scarcely deserving of that honorific, and it is no surprise that the word ‘neta’ is commonly and justly viewed as a term of abuse and vilification.  Netas are often those who plunder the nation.  Holding no elected office in either independent India or even in the Congress party after his one-year term of presidency of the Congress in the early 1920s, and having no riches or possessions to his name, Gandhi cannot be bunched together with the netas, small and big, who populate the Indian scene.  But Gandhi was equally reluctant to being deified:  he openly disowned the idea of being a Mahatma, and would have shuddered at the thought of being assimilated into Hinduism’s gods and goddesses.   Gandhi occupies, we may say, a position betwixt the politicians and the gods, and yet a position that is akin to neither.  Perhaps that old and tiresome question, of whether he was a politician in saint’s garb or a saint who muddled his way through politics, will never go away.

One keen observer of Indian politics who has always remained aware of the framed Gandhi is the cartoonist R. K. Laxman, famous among other things for his creation of the ‘common man’.   In one cartoon after another, Laxman lampooned the netas, bureaucrats, and the sycophants who came to define ‘politics’; significantly, the framed photograph of Gandhi looms large in his work, as the three cartoons reproduced here amply demonstrate.  Laxman was keen to underscore the hypocrisy of politicians, leaders, and party office holders, though ‘hypocrisy’ is perhaps a banal and even relatively benign word to characterize those who, under Gandhi’s portrait, did not hesitate to offer or accept bribes, engage in horse-trading, engineer ‘disturbances’ in the interest of advancing the party’s electoral prospects, and so on.  Still, Laxman may have missed out on one element in his representation of the Gandhi looming behind the frame.   As I have had occasion to write elsewhere, there is no constituency in India – liberals, Marxists, constitutionalists, Hindutvavadis, militants, feminists, Dalits, Punjabis, Bengalis, communalists, gays and lesbians, most of all Gujaratis, and then countless more – that does not love to hate Gandhi

.  He has been framed for every imaginable ill that has afflicted India:  some hold him responsible for the partition of India; others for upholding caste, relegating women to the household, and allowing the bourgeoisie an easy ride; and many others for betraying his fellow Hindus.  There are even those who find the hand of Gandhi behind the culture of gherao, strikes, hartal, and the evasion of law.  And one could continue in this vein.  So, when we frame Gandhi, we do far more than enclose his photograph or portrait behind glass.  Our habit of framing Gandhi has more to it than meets the eye.

(This piece is available in an Uzbek translation here:  http://eduworksdb.com/gandhis-photograph-and-the-politics-of-the-frame/)

An Estonian translation of this article by Martin Aus can be found here:  http://techglobaleducation.com/gandhis-photograph-and-the-politics-of-the-frame/