I first heard of Nelson Mandela in 1983 when, on a five-month long trip to Australia where I was traveling as a Thomas Watson Fellow, I encountered an Australian peace activist who had the audacity, as I then thought, to mention him alongside Gandhi as a heroic figure in the fight against oppression.   There was a time, though the present generation has no awareness of this fact except as an abstraction that concerns them little, when there was no internet; and, in the Australian outback, though I hungered for more information, stunned by my interlocutor’s invocation of Mandela’s now famous speech at Rivonia, I had no recourse to a library.

Several months later, back in India, I was distracted by other thoughts and it was not until I commenced my graduate work at the University of Chicago in the fall of 1984 that Mandela once again came to my attention.  The anti-apartheid movement was then in full swing; on university campuses in the United States, the call for sanctions and divestment from corporations that traded with South Africa’s apartheid regime was loud and clear, though it is my impression that university administrations remained largely indifferent to student-led demands that universities disengage in every respect with the brutal system of apartheid.  At the University of Chicago, the public face of the anti-apartheid movement was an Indian graduate student, Sahotra Sarkar, who now holds a professorship in the philosophy of physics and biology at the University of Texas, Austin.  At the end of every rally, invariably accompanied by shouts of ‘Free Mandela’, the motley crowd of radicals and activists would raise their fists to the chorus of ‘Amandla’, the Zulu word for ‘power’ that had become the rallying cry of the African National Congress (ANC).  On one occasion, sometime around 1986, Sahotra announced a 48-hour hunger-strike in an effort to make the university administration more responsive to student demands.  A handful of supporters, myself included, joined him in a sympathetic fast.  This was my most substantive initiation into activist politics.  It will be for the historians to judge how far thousands of such actions, carried out across the world, contributed to Mandela’s release from prison, the eventual dismantling of apartheid, and the birth of a free South Africa. 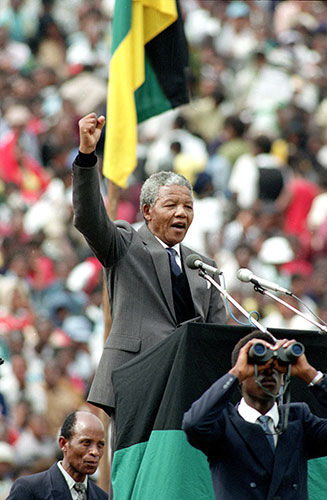 Nelson Mandela gives the black power salute during a speech on 13 February 1990, two days after he was released from prison. Photograph: AP

Mandela is no more; yet, as Obama put it in his public pronouncement hours after Mandela’s death, echoing the words said to have been uttered by Secretary of War Stanton upon being told of Lincoln’s assassination, ‘now he belongs to the ages’.  Still, however apposite this thought, there are many critical questions that linger on, and some are called to mind by the deafening noise with which Mandela’s life is now being celebrated even as the last vestiges of everything he stood for have disappeared from our moral compass.  Mandela himself always recognized, even if the American media with its obsessive addiction to the ‘Great Man of History’ theory is too dim-witted to allow for any such admission, that the movement was much greater than him, and that he alone was not called to sacrifice:  countless others, some named, an equal or greater number unnamed, were lost in the struggle against apartheid and its supporters, among them the so-called leaders of the Western world (nowhere more so than in the US) who continued to offer unstinting support to the white despots of South Africa. Oliver Tambo, Walter Sisulu, Chris Hani, Yusuf Dadoo, Steve Biko, Ahmed Kathrada, Govan Mbeki, Joe Slovo: the names—and there are many more—roll off the tongue, one after another, each incessantly engaged in a principled struggle to recover the dignity of human beings.

All this was known to me by my own reading of South African history, but I was brought to a visceral awareness of the ugly facts of apartheid—and the repertoire of creative and extraordinarily responses to such forms of dehumanization—by a chance meeting with the artist Ronald Harrison on my only visit to South Africa in 2006.  Harrison recognized Albert Luthuli, the greatest exponent of the idea of nonviolent resistance in South African history, as his political and spiritual mentor.  Harrison, who passed away virtually unheralded in 2011, has related in his memoirs that he was struck by an epiphany shortly after he embarked upon his career as an artist:  what if he were to signify the suffering of South Africa’s black people by recalling the crucifixion of Christ, rendering Luthuli as a modern-day Christ and apartheid’s ideologues, Verwoerd and Vorster, as Roman centurions, “the tormentors of Christ”?  And so came about Harrison’s painting, ‘The Black Christ’:  unable to recognize the living Christs in their midst, apartheid’s ideologues and assassins, who had already claimed the great Luthuli as one of their victims, staging his death as an ‘accident’ on the railway tracks close to his home, would go on to imprison and torture Harrison.  For thirty-five years, Harrison’s painting, which the apartheid state’s censors would not permit to be exhibited, languished in a London basement home.  Yet, when I met Harrison for the first time in 2006, he held no grudge against his oppressors:  much like Mandela, he worried that we might become akin to those we despise.  As he was to write movingly in The Black Christ:  A Journey to Freedom (2006), “Verwoerd had been a monster; he had been a tormentor.  But he had also been a loving husband, a caring father, someone’s friend, the beloved son of proud parents.”

It is, of course, these very qualities of generosity, forgiveness, and compassion that have endeared Mandela to people around the world.  It is also precisely these qualities that were never even remotely on display among the political leaders and elites of the West, when the African National Congress called for a worldwide resistance to the apartheid regime, who are now outdoing each other in their craven attempt to be viewed as being on the right side of history.  If this is the time to remember what Mandela stood for, it is also the time to remember that the United States, France, and Britain insistently, repeatedly, and unfailingly vetoed mandatory United Nations resolutions in the Security Council calling for sanctions against South Africa under Chapter VII of the UN Charter.  Many will suggest that such ‘hypocrisy’ is indisputably a part of the game of politics, but why then celebrate Mandela’s life at all?  The African National Congress was, of course, closely allied to the South African Communist Party, and Mandela remained keenly aware, to the end of his life, of the immense price paid by Dadoo, Slovo, and others stalwarts of South African communism.  It is to Mandela’s credit that he never disowned those friends and supporters who stood by him during his difficult years, among them the much reviled Fidel Castro and even Muammar Gaddafi.

There are, for those interested in Mandela’s life and even more so the history of the long struggle against apartheid, many questions that remain to be asked.  While Chief Luthuli, South Africa’s first Nobel Laureate in Peace (though this is commonly forgotten), and the principal architect of the ANC’s policy of boycott in 1959, offered nothing but unwavering support to Mandela, notwithstanding his own principled conviction in the power of nonviolent resistance, Mandela’s own part in having contributed to the partial evisceration of Luthuli’s legacy and even the public memory of Luthuli will no doubt be investigated in years to come.  One could also probe whether Mandela’s three-decade long term in prison had, in various ways, the effect of obfuscating his understanding of globalization. But these considerations, and many more, pale before the most pressing question that should be present to those living in the US, Britain, and France, among other countries in the global North.  Why did not these countries do more to offer support to the African National Congress and the movement of resistance to oppression?  Whatever damage apartheid did to Mandela, it surely also caused irreparable damage to the West.  There is perhaps no more glaring evidence of this than the fact that growing inequality strikes at the very root of these societies.  To take cognizance of Mandela’s life is to acknowledge that various forms of apartheid have crept into what are ostensibly free societies.

For a translation into Spanish of this article by Anibal Goransky, see:  http://www.anibalgoransky.com/apartheid-y-occidente-algunos-pensamientos-sobre-la-vida-de-nelson-mandela/

A Polish translation of this article by Marek Murawski can be found here:  http://fsu-university.com/apartheid-i-zachod-kilka-mysli-na-temat-zycia-nelsona-mandeli/