The history of colonial India was, one might say, bookended by political trials.  The crimes of Warren Hastings, the first Governor-General of India, were showcased in lengthy impeachment proceedings against him in the British Parliament from 1788-95; towards the end of 1945, the first of a series of Indian National Army (INA) trials generated an extraordinary upsurge of sentiment against the British and doubtless hastened the end of two hundred years of colonial rule.  Nearly every pivotal moment in the history of British India was similarly marked by a political trial:  one can enumerate in this respect the trail of Bahadur Shah Zafar in 1857-58, which signified the formal end of the Mughal Empire, the two trials (in 1897 and 1908) of Bal Gangadhar Tilak, who represented, in the colonial vision, the ‘extremist’ phase of Indian politics, or the various trials, on charges of sedition, treason, conspiracy, or revolutionary violence, of Aurobindo, Mohandas Gandhi, Bhagat Singh, M. N. Roy, and Lala Lajpat Rai, each of whom nonetheless represented a different constituency of anti-colonial Indian politics.

Occupying a remarkable place in the arena of state activities in colonial India, political trials were never just only a form of contestation between the state and its colonized subjects.  Such trials of state were generally never convened without the expectation that, in the dramatic setting of the courtroom, the performance of both the state and the rebels would be received with utmost attention; and though not all trials were accompanied by fanfare, by the loud trumpeting of the triumph of justice, they were each in their own way spectacles to which the entire nation stood witness. 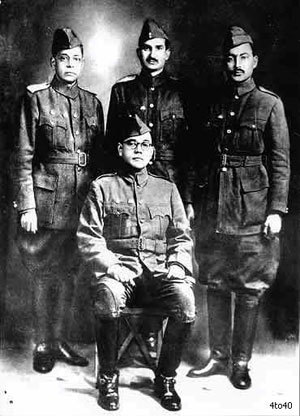 Subhas Bose with Officers of the INA

The setting for the INA Trials was indeed dramatic:  having fled from India in January 1941, Subhas Chandra Bose eventually made his way to Berlin where the Nazis assisted him in setting up a Free India Center.  In December 1941, the German army had agreed to hand over to Bose such captured prisoners from the (British) Indian Army as were agreeable to joining the Indian Legion, a military force that Bose was establishing though it was to be placed under German command.  It is in Europe, then, that Bose started recruiting captured Indian POWs to aid in the liberation of India, though he had comparatively little success:  only 2,500 of the approximately 17,000 POWs could be induced to join the Indian Legion.  Meanwhile, the theatre of war had moved to the Asia and the Pacific, and it is in September 1942 that the first Division of the INA comprised of 16,300 men was raised under the leadership of Captain Mohan Singh.  A year later, Bose summoned the remnants of the INA, renamed it the Azad Hind Fauj [Free India Army], and energized it, in a move reminiscent of Gandhi’s “Do or Die”, with a simple but entrancing slogan:  “Chalo Delhi.”

In 1943-44, the British had instituted the first courts-martial of British Indian Army personnel captured as INA troops.  However, these trials excited little attention, and even most historians have scarcely paid any attention to them:  much of the Congress leadership was behind bars, and, moreover, the Congress position, as articulated by Nehru, was that however patriotic and well-meaning INA men might be, they had “put themselves on the wrong side and were functioning under Japanese auspices.”  What has become known as the INA Trial, launched in November 1945, was a different story.  The INA had seen significant military action in the Imphal-Kohima sector and INA troops had become the stuff of legends.  Bose himself had died in a plane crash in August 1945; though the circumstances of his death were deemed highly suspicious by many, his apotheosis as the great martyr had taken place.  Nevertheless, Britain’s victory in World War II as part of the Allied forces was decisive, and the INA had been disbanded in May 1945.   Soldiers who had engaged in traitorous conduct could not be allowed to go unpunished.

Military Parade of the INA at Padang

In putting Colonel Prem Sahgal, Colonel Gurbaksh Singh Dhillon, and Major-General Shah Nawaz Khan on trial on the charges of murder, abetment to murder, and “waging war against the King-Emperor”, the British scarcely anticipated the uproar that ensued.  The Congress Working Committee passed a resolution in sympathy with the prisoners.  Nehru, in a speech delivered on November 3, two days before the prosecution was launched, stated that “the trial of the three INA officers will be of historical importance. . . .  It touches the sentiments of the whole nation.”  Demonstrations in solidarity with the accused were held throughout the country, and Gandhi and Patel were among those who visited the accused in jail.  A Hindu, Sikh, and Muslim had been put on trial, in unintended homage to Bose’s own defiance of communal divisions, and the Congress defended all three men.  The Defence Committee was made up of a stellar list of legal and political luminaries, headed by Sir Tej Bahadur Sapru.  Bhulabhai Desai, who argued that the accused could not be tried under the Indian Penal Code and that international law was applicable in this case, was largely responsible for the defence; and much has been of the fact that Nehru, who had ceased to practice law at least 25 years ago, donned his barrister’s gowns and made a couple of appearances in court.

Jawaharlal Nehru and Sir Tej Bahadur Sapru, to his right, proceeding to the INA Trial.

The outcome was preordained:  all three accused were found guilty and handed down a sentence of deportation for life.  Meanwhile, however, a mutiny had broken out on several of the ships and shore establishments of the Royal Indian Navy, and all this made transparent that, in the words of the feminist and socialist Kamaladevi Chattopadhyay, “it was really freedom versus bondage that was really on trial.”  Acting under immense pressure, army chief Claude Auchinleck, in whom rested the final authority to dispose off the case, commuted the sentences of the three defendants.

Crowds Gathered Outside the Red Fort during the INA Trial

The trial, I have implied, can well be seen as a locus for the colonialist sociology of knowledge, the micro-politics of power, and the cultural politics of resistance. To appreciate, nonetheless, the singularity of the principal INA Trial, I shall suggest only three lines of inquiry.  First, it is striking but not surprising that the trial was held at the Red Fort, rather than a courtroom. The Red Fort had been the seat of the Mughal Empire, and the British chroniclers of the great rebellion of 1857-58 noted that when the British reoccupied Delhi in late 1857, they signified their dominion over India by rendering profane the sacred space of the Mughals and defiling it with the consumption of pork and wine, both taboo to observant Muslims.  He who seeks to show his authority over India must command the Red Fort.

Secondly, why did the Congress, which had earlier adopted the view that the INA recruits were patriots but nevertheless misguided in their willingness to join a fighting force aided by fascists, so unambiguously take up the defence of the INA accused? Were Congress leaders positioning themselves for the provincial elections and the struggle ahead?  Was this a final attempt on the part of the Congress to project itself as an organization that alone could withstand the furies of communalism?  And, finally, does the mass popular sentiment in support of the INA accused suggest that Gandhi had been sidelined or does it contrariwise point to the fact that the Quit India movement had moved India irrevocably towards freedom?  Whatever’s one outlook on these questions, the centrality of the INA Trial in the narrative of late nationalism cannot be doubted.

A shorter version of this piece appeared in print as “The Call to Freedom:  How the INA Trial Hastened the End of British Rule”, The Eye—Indian Express (Sunday) Magazine (3 January 2016).

Join 820 other followers
Follow Lal Salaam: A Blog by Vinay Lal on WordPress.com