Part III of North Korea and the Threat of Nuclear Annihilation 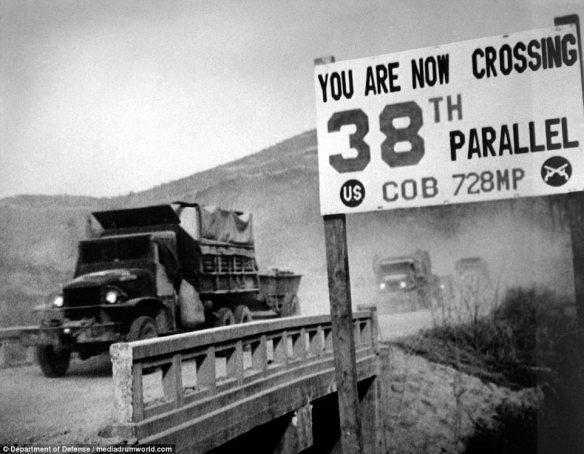 he dividing line between North and South: United Nations forces are seen retreating from Pyongyang, the North Korean capital, in 1950, across the 38th parallel.  Source: http://www.dailymail.co.uk/news/article-4454820/When-America-went-war-Korea-time.html#ixzz51JHYydbZ

The commonplace narrative of the Korean War renders the North’s surprise attack on the South on 25 June 1960 as a desperate attempt at land-grabbing and unification by a ruthless dictatorship.  Such accounts obfuscate a number of critical developments between 1945 and 1950. The Russians quit North Korea in late 1948; the Americans did likewise, leaving South Korea around the same time.  Forces from both Koreas frequently violated the border, and a series of incursions into North Korea from the South preceded the North’s invasion of June 25th.  Thoughts of unification were ever present among political leaders both in the South and the North:  as Kim il-Sung, the grandfather of Kim Jong-un and the founding father of the country’s political dynasty, wrote in January 1950 to the Soviet Ambassador to his country, “Lately I do not sleep at night, thinking about how to resolve the question of the unification of the whole country.” [See John Gaddis, We Now Know, 1998: 73] 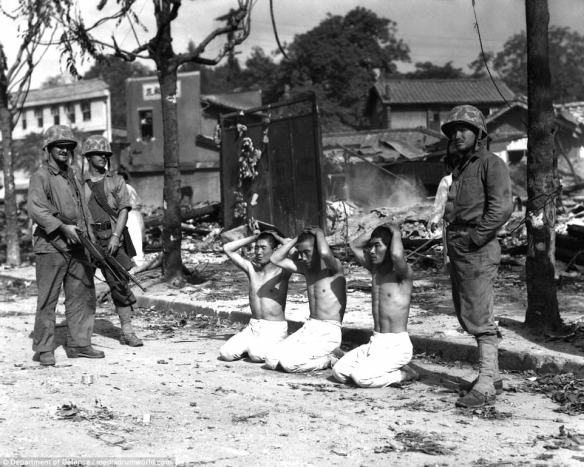 Enter a captionUS Marines guarding three captured North Koreans in a picture believed to have been taken in 1950.  Source: http://www.dailymail.co.uk/news/article-4454820/When-America-went-war-Korea-time.html#ixzz51JITdQjk

South Korea, for its part, was determined to seek unification on its own terms.  More importantly, the allegedly democratic regime installed in South Korea was scarcely less dictatorial than the one in the North.  The leading American historian of the Korean War, Bruce Cummings, speaks of the ferocity of anti-Communist sentiment and “an orgy of state violence” in the South, suggesting that “between 100,000 and 200,000 people died as a result of political violence before June 1950, at the hands of either of the South Korean government or the US occupation forces.” “In short,” he has written in a recent issue of the London Review of Books (18 May 2017), “the Republic of Korea was one of the bloodiest dictatorships of the early Cold War period; many of the perpetrators of the massacres had served the Japanese in their dirty work—and were then put back into the power by the Americans.” It is not difficult to understand, however opaque such considerations may be to successive American administrations, why North Korea fears the axis of South Korea-Japan-United States, and why the Kim dictatorship appears to the subjects of the North Korean state as the heroic champion of revolutionary nationalism that slayed the dragon of Japanese imperialism.

If much in occluded in the commonplace narratives of Korea’s history between 1945-50, the pulverization of North Korea from the air during the war constitutes perhaps the most gruesome chapter in the global history of aerial bombing.  The “U.S. dropped 635,000 tons of explosives on North Korea, including 32,557 tons of napalm”; in comparison, 503,000 tons of bombs were dropped by the US in the Pacific Theatre, an area vastly greater than North Korea, in four years during World War II.  On “an average good day”, according to an US Eighth Army chemical officer quoted in a recent study of napalm by Robert M. Neer, American pilots dropped 70,000 gallons of napalm, which US Marines cheerfully nicknamed “cooking oil”, over North Korea (see Napalm:  An American Biography [Cambridge, Mass.:  Harvard University Press, 2013]). The sadistic Curtis Le May, one of the architects of the American fire-bombing of Japan and the head of the Strategic Air Command during the Korean War, quite casually admitted some years later, “Over a period of three years or so, we killed off—what—20 percent of the population” (New Yorker, 19 June 1994).  Secretary of State Dean Rusk described what may be thought of as the formula that the United States put into practice in choosing targets: “everything that moved in North Korea, every brick standing on top of another.” According to the North Koreans, as reported by one historian, “by the end of the war” there were “only two modern buildings” that “remained standing in Pyongyang”, and by the fall of 1952 “every significant town, city and industrial area in North Korea had already been bombed.” [See Charles K. Armstrong, “The Destruction and Reconstruction of North Korea, 1950-1960”, The Asia-Pacific Journal 7 (16 March 2009), 1-9.] 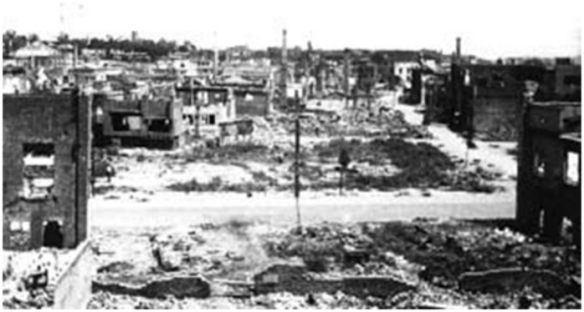 Pyongyang in 1953, after the sustained aerial bombing by Americans. 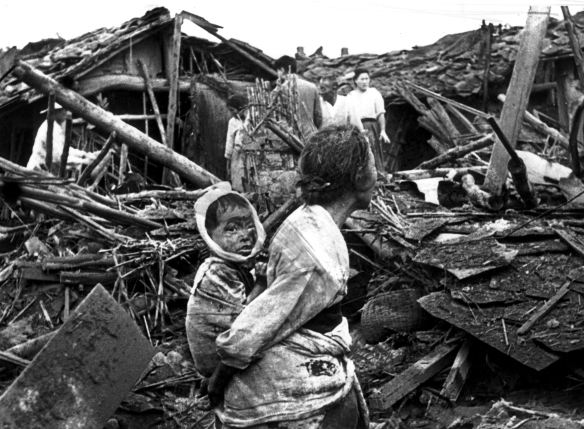 An elderly woman and her grandchild walk among the debris of their home in Pyongyang, in the aftermath of sustained aerial bombing by the Americans.   Source:  Keystone/Getty Images; see:  https://theintercept.com/2017/05/03/why-do-north-koreans-hate-us-one-reason-they-remember-the-korean-war/

The ‘forgotten’ war, when it is at all remembered, still remains in the American imagination a ‘limited’ war.  North Korea, however, experienced it as a ‘total’ war, a war of genocidal intent.  A handful of journalists and scholars have mustered the courage to speak of American war crimes in Korea, but no one has thought that the Kim dynasty in any manner stands exonerated of its own unspeakable crimes in North Korea.  Indeed, a recognition of the American role in killing close to three million civilians, the greater majority of them in North Korea, in wiping out the industrial base in North Korea, and in making impossible for some years agricultural production beyond subsistence levels, should not preclude one from recognizing the stranglehold that the Kim family dictatorship exercises over the lives of common people.  No defense of the brutal dictatorship of North Korea, which has obliterated thousands of lives and sent millions more into poverty while a handful of elites, led by the comical “Great Leader”, squander the country’s wealth to indulge in unspeakable luxuries, is implied in any criticism of American foreign policy.  What is transparently clear is that political discussions in the United States around Korea remain spectacularly oblivious both of the psychological effects of the war that persist into the seventh decade after its end and the purchase—in political, social, cultural, and educational terms—that the North Korean regime continues to derive from its masterful deployment of history and propaganda to keep in power and run the state itself as little more than a concentration camp.

Beyond all this, however, is the one unpalatable truth that is not recognized in the laws and conventions that govern relations between states and shows how much further international law still has to evolve if the notion of being ‘civilized’ is not to remain a sham.  To threaten a sovereign state with genocide and nuclear annihilation, and that too under the roof of the United Nations, should itself be construed as a crime against humanity.  It is an indubitable fact that the United States has on several occasions, since the end of World War II, contemplated the use of nuclear weapons.  In November 1950, President Truman had revealed at a press conference that the use of nuclear weapons in Korea had always been “under consideration”.  Ever since, North Korea has lived under the shadow of that threat, and numerous American politicians have called for the nuking of the country: it is an intolerable burden for any country to shoulder.  There is but no question that the calls for dialogue and negotiation must be heeded, but the admission that constructive conversation, or whatever other anodyne term one prefers, is an indispensable requirement for ensuring that the Korean peninsula is not engulfed in unquenchable flames may not have much traction in the years ahead unless the notion that no country has a legitimate interest in nuclear weapons is seriously entertained.  Nuclear weapons ought not to be a matter of inheritance; if countries insist on that privilege, that alone should be enough to render them into pariahs.