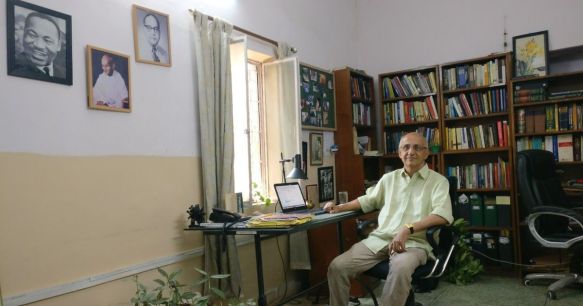 Once upon a time, Harsh Mander was a member of the Indian Administrative Service (IAS).  His predecessors in the colonial-era Indian Civil Service were known as the ‘heaven-born’.  Then, in 2002, Gujarat was convulsed by hatred and orchestrated violence, and at least 1044 people—and more likely as many as 2000, according to the Concerned Citizens Tribunal as well as other independent investigative bodies—were killed, predominantly Muslims. More than 100,000, and perhaps twice as many, Muslims were displaced.  It is at this time that Mander resigned from the IAS, giving up what has long been one of the most coveted jobs in the country, and turned to a life of political and social activism. One might say that he had found his voice and his calling. Since those dark days in Gujarat nearly two decades ago, Mander has more than distinguished himself as a human rights activist, a tireless advocate of social justice, a friend sans pareil to the poor, the homeless, and the hungry, and as the very conscience of a nation that is now being undone by those who are utterly bereft of principles, compassion, and the ethical mores that make possible brotherhood and sisterhood.

END_OF_DOCUMENT_TOKEN_TO_BE_REPLACED

For all the apparent simplicity of its plot, Yash Chopra’s Deewaar (1975) — on which I have written a book [HarperCollins, late December 2010] to which I made reference in my blog earlier this month — twists and turns on a number of phenomena, none perhaps as remarkable as the act of writing.  Though Deewaar has generated its fair share of commentary, scholarly and otherwise, I am not aware that the palpable significance of the written word as such has previously been registered much less interpreted.  To be sure, the tense indeed terse conversation that ensues between Vijay and his brother Ravi in the aftermath of Vijay’s purchase of a skyscraper, when Ravi asks for Vijay’s written confession – mujhe tumare sign chaiyen, ‘I want your signature’– has already been inscribed into the annals of the most famous dialogues in Hindi cinema.  Conversation is perhaps not the best of words; confrontation more accurately describes their exchange.  As an aside, it is notable that Vijay and Ravi each have conversations with others, but seldom with each other.  They exchange words with each other on a few occasions, but these should not be confused for conversations.  An older meaning of ‘conversation’, the Oxford English Dictionary reminds us, referred to sexual intimacy and even the act of sexual intercourse; though this meaning of ‘conversation’ is now lost to us, the word retains suggestions of social intimacy, living together and consorting with others.  Such intimacy is not shared between the two brothers, even if Vijay frequently attempts to draw upon what he hopes are shared memories.

In a film bursting with crackling dialogues, it is scarcely an accident that many of the most telling lines are delivered around the subject of the written word, and that the signature marks the advent of a new sensibility.  Writing inaugurates a hermeneutics of suspicion, introducing new hierarchies of power and establishing a contrast between status, where one’s place in the social hierarchy is a matter of ascription, convention, and unwritten traditions, and contract, an agreement that is legally enforceable in a court of law.  The signature is the most dense and iconic of all acts of writing.  The written invariably introduces uniformity, even if there is inconsistency within a document and between texts; and the alphabetization of the script has even been interpreted as a charter of oppression for some people. The signature, moreover, is the infallible mark of identity, and forgery of a signature is tantamount to what, in modern parlance, is called identity-theft.

Let me dwell on the inaugural moment of the signature in Deewaar as a prolegomenon to a more considered evaluation of the act of writing that readers will encounter in my book.  These pages, modified to some degree from the text of the published book, should suffice to indicate the tenor of the argument.  The signature makes an early and pivotal entry in Deewaar.  Anand Babu, entrusted by mill workers with negotiating a fair agreement with the management, is confronted with a difficult choice.  A folder is placed before him, and as he turns one page after another, Anand Babu asks what is the meaning of this insult:  the proposed “new” agreement offers the labourers terms which they have already rejected.  Anand Babu is asked to turn another page:  smack in its middle is a photograph of his wife and their two sons, Vijay and Ravi, all now held hostage at the owner’s command.  There, in the background, is the crack of thunder:  events in the social world have their counterpart in the natural world, however much the modern dispensation to think of the physical and social worlds as distinct entities.  What, asks Anand Babu in obvious rage, if I were not to sign?  The plot, a sophisticated viewer is likely to think, is but chicken feed; and the Hindi film’s love for the baroque and the garish is none too subtly conveyed by the camera’s turn towards one of the more fearsome hooligans who is described, as he twirls his moustache with a menacing look on his face, as a man who has twice been to jail, once on the charge of murder.  ‘I want my wife and children’, says Anand Babu; ‘and I’, replies the seth, ‘want your signature.’  That is not what one would be inclined to describe as a fair exchange, but one must never underestimate the weight behind the signature.  Sign the papers, Anand Babu is told, or perish the thought that you will ever see your loved ones again.  Lightening strikes:  here is a portent of the unrelenting darkness that is about to descend on the lives of Anand Babu, his family, and the community of workers.

The seth holds up the pen in one hand; Anand Babu looks down at the photograph and then his eyes hover on the pen.  When I first saw this film as an adult, I was reminded of the essay question on which generations of school children in India were brought up, though perhaps in this computer age the question no longer resonates as mightily as it once did.   We would be asked to discuss, ‘Is the pen mightier than the sword?’, though the interrogative form always seemed specious.  It was understood that, unless one was willing to subscribe to some notion of naked power, the greatness of the pen had to be affirmed – an affirmation all the more necessary in view of the fact that, idealist sentiments aside, the pen was viewed as being at an incalculable disadvantage with respect to the sword.  Norms of civility demanded that the pen be made triumphant over the sword.  That apparent opposition – the one an instrument of civilization, of letters and philosophy, the other the symbol of brute strength – is in Deewaar dissolved at this junction, since both the pen and the sword are to be the instruments of Anand Babu’s defeat.  Wordlessly, Anand Babu grabs the pen; his hand clutched to it, he hesitates:  back and forth the camera moves, against the crescendo of thunder outside, between the paper that demands his signature and the image of his captive family.  The camera zooms in on his hand as he affixes his signature to the nefarious agreement, and then cuts to Anand Babu standing before the workers in pouring rain:  he offers no explanation for his conduct, only an account of his capitulation:  ‘I’ve signed all the papers of the agreement and agreed to all their demands.  I’ve also agreed that the labourers will toil at the same wages that they received before – and that if there is another strike, it will be illegal.  I’ve sold you all off.’