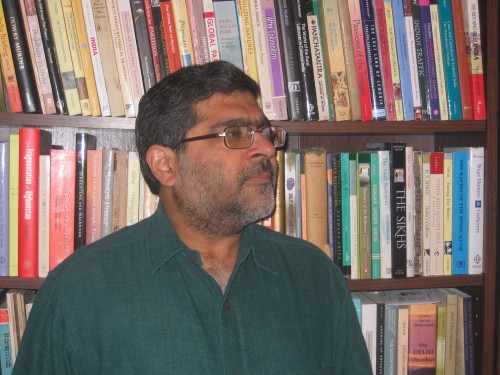 Vinay Lal was born in Delhi and raised in India, Indonesia, Japan, and the United States. He studied literature, history, and philosophy as an undergraduate, and earned his B.A. from the Humanities Center at Johns Hopkins University in 1982. He received a M.A. from the same institution, also in 1982, for a thesis on Emerson and Indian Philosophy. He then studied film in Australia and India on a Thomas J. Watson Fellowship before commencing his graduate studies at the Department of South Asian Languages and Civilizations at the University of Chicago, where he was awarded his Ph.D. with Distinction in 1992. His dissertation, “Committees of Inquiry and Discourses of ‘Law and Order’ in Twentieth-Century British India”, received the Marc Galler Award for the best dissertation in the Division of the Humanities at the University of Chicago. He was a William R. Kenan Fellow, Society of Fellows in the Humanities, and Lecturer in History, at Columbia University in 1992-93.

Vinay joined the history faculty at UCLA in Fall 1993, and has since held several fellowships, including a Senior Fellowship from the American Institute of Indian Studies, a National Endowment for the Humanities Fellowship for University Teachers, and a fellowship from the Society for the Promotion of Science/Japan Area Studies Center at the National Museum of Ethnology, Osaka. He was elected a Fellow of the World Academy of Art and Science in February 2000.  He served as Professor of History at Delhi University, 2010-11, before returning to his position at UCLA.

Vinay teaches a broad range of courses in Indian history, comparative colonial histories, and subaltern history and Indian historiography, as well as graduate level seminars on the contemporary politics of knowledge, postcolonial theory, and the politics of culture. His views on American foreign policy and the pax Americana have earned him a place in David Horowitz’s book on the 101 ‘most dangerous’ professors in America today, while his critiques of extreme Hindu nationalism have made him a target of Hindutva venom in the US. These are reliable indicators, to his mind, that he is performing some useful public service, and that academics and scholars must remain vitally engaged in the wider public domain.

Vinay is a member of the editorial board of nearly ten journals, including Critical Muslim (London), Journal of Social History (US), Third Text (London; Routledge), Culture, Theory, and Critique (Routledge), and South Asian Diaspora (Routledge).  He has written regularly on a wide variety of subjects for periodicals in the US, India, and Britain, including the Economic and Political Weekly (Mumbai), The Little Magazine (Delhi), and Social Scientist (Delhi). Lengthier scholarly articles have appeared in such journals as Diaspora, Social Text, South Asia, Genders, Journal of the History of Sexuality, Environmental Ethics, History and Theory, Studies in History, Patterns of Prejudice, Social Epistemology, Radical History Review, and Third Text. Among other subjects, he has written on various aspects of the political and legal history of colonial India, sexuality in modern India, the popular Hindi film, the Indian diaspora, Indian documentaries, the politics and history of history, dissent in the Gandhian mode, contemporary American politics, the politics of culture, genocide, and the global politics of knowledge systems.

Vinay’s seventeen authored and edited books have appeared from Oxford University Press, Pluto Press, Penguin Books, and HarperCollins among other publishers, and his work has been translated into French, German, Spanish, Finnish, Hindi, Urdu, Kannada, Korean and Persian.  His most recent books are the two-volume Oxford Anthology of the Modern Indian City (Delhi:  Oxford University Press, 2013) and A Passionate Life:  Writings by and on Kamaladevi Chattopadhyay, co-edited with Carol Ellen DuBois (Delhi: Zubaan; distributed in the US by the University of Chicago Press).  More information on his books is available from the ‘Books’ page on this blog.

Vinay’s UCLA lecture courses on the history of Indian civilization, the History of British India, Contemporary South Asia, the Global Indian Diaspora, to name a few, are available in their entirety at YouTube, the only such courses on the internet.  They can be accessed free of charge and have been organized in playlists; as of the end of 2017, these lectures had more than 1.33 million views.  Visit his YouTube channel at:  https://www.youtube.com/user/dillichalo