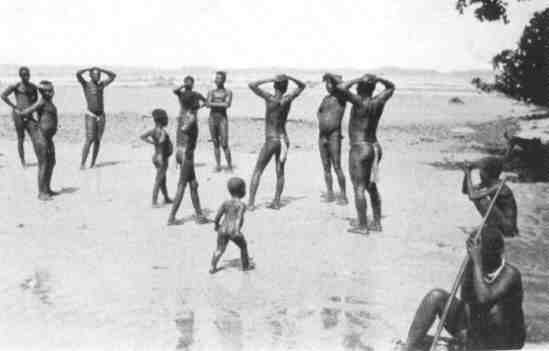 The Great Andamanese relaxing by the water, 1920. 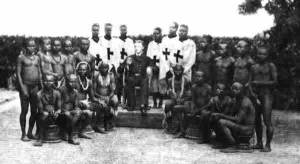 An indescribable feeling of sadness crept over me when I read some days ago of the passing away of Boa Sr., the last known speaker of Bo (also known as Aka-Bo and Ba), one of ten languages belonging to the Great Andamanese group.  Though Boa Sr. had learnt Hindi and was able to converse with the outside world, over the last three decades she remained Bo’s sole speaker.   What great many thoughts could she not convey to others?  How must she have felt to know that she was the only surviving speaker of a language and the link to a world that only she could apprehend?  How must it feel to know a language and yet not be able to communicate in it with anyone else?

In an earlier time, Boa Sr. would have been rendered into a museum piece.  Her death brought to mind the fate of Truganini, the last of the Tasmanian Aboriginals.  The few thousand Tasmanian aboriginals encountered by European colonizers had, through genocide, disease, and murderous neglect, been reduced to 47 women, men, and children by 1847, and for the last three years, before her death in 1876, Truganini led a solitary existence in Hocart as the last Tasmanian aboriginal.  Shortly thereafter, her skeleton would be exhibited for the benefit of the curious-minded and the scientific-minded alike.  Those were the indignities to which people such as her, and the Andamanese, have been subjected since they came into contact with what is called ‘civilization’.  In the barbarous language of the day, occasionally still encountered when, for example, the Americans come into contact with ‘unruly’ tribesmen in Afghanistan, the unquestionable duty of the Europeans was to pacify the wild islanders.

The Andamans have long been the haunt of anthropologists and criminologists. In the mid-19th century, the British established a penal colony at Port Blair, reserving the infamous ‘circular jail’, also studied by those who are entranced with the idea of Jeremy Bentham’s panopticon, for political prisoners transported for life.  A man sent across the kaala paani [literally, ‘the black waters’], so the British figured, was as good as dead, and not merely because no “convict” was expected to return alive to civilization.  Before the convict entered into what we might call ‘social death’, he was supposed to have suffered what we might understand as ‘psychic death’ since the passage across ‘the black waters’ was deemed to have led the person to lose caste.  That, in the British view, was horrible enough a suffering for a caste Hindu.  Later in the 19th century, as anthropometry and craniology, among many of the other supposed sciences gifted by the West to the rest, became the rage among European and American scientists, anthropologists, criminologists, and psychologists, the British began to arrive in the Andamans with rulers and other measuring instruments.  The intent was to ascertain where the Great Andamanese belonged in the ‘scale of civilization’, a determination that apparently could be made by measuring the distance from the navel to the nose, from the nose to the eyebrow, and so on.  No wonder idiocy is known by many names!  The only firm lesson to be learnt from all this appears to be that if one wants to lead a European somewhere, lead him by the nose.

The twin processes of pacification and assimilation had the unsurprising consequence of decimating the population of the Andamanese and other tribes on the Andaman islands.  Some tribes were rendered extinct – the Aka-Kol in 1921, the Oko-Juwoi and the Aka-Bea by 1931.  In 1858, when the Great Andamanese first came into contact with the British, they numbered around 5,000 people.   Attempts with which we are familiar from the long history of colonialism to ‘civilize’ them were, of course, nothing but another name for genocide.  In one experiment, children born between 1864 and 1870 were placed in what came to be called ‘Andaman Homes’, but none of the 150 children lived beyond the age of two.  Nevertheless, the colonial administrator Maurice Portman gave it as his opinion that ‘Under any circumstances the Homes should certainly be maintained until the whole of the Andaman Tribes are friendly’ [quoted in Madhusree Mukherjee, The Land of Naked People (Boston:  Houghton Mifflin, 2003), 66].  One way to ensure that people are friendly, which is to say not hostile, is to eliminate them.  In 1901, the Census still recorded 600 Great Andamanese, but by 1951 their numbers had been reduced to 23.  The Sentinelese, who have miraculously evaded all attempts at contact, had been reduced to 10 in number by 1951. Today, according to the Indian linguist Anvita Abbi, who came to have a close association with Boa Sr. over the last decade and whose work in the Andamans is reflected in the “Vanishing Voices of the Great Andamanese” (VOGA) project, there are about 50 Great Andamanese still alive.

The Great Andamanese, we are told in this obituary of Boa Sr. published in Survival International, “are thought to have lived in the Andaman Islands for as much as 65,000 years, making them the descendants of one of the oldest human cultures on Earth.”  If it were true, one should marvel at this fact – and consider the possibility that, in this age of dazzling technology, that unbroken link may be snapped before our own eyes.  Either way, the question of just who the Andamanese are, and what they represent for the history of humankind, is not easily resolved.  For even the most well-intentioned linguists and anthropologists, the Great Andamanese – and the other three main groups on the islands, namely the Jarawa, Onge, and Sentinelese – still represent principally a crucial picture of the puzzle about the origins of human societies, language groups, the migrations of people and their languages, and so on.  The quest to know everything, manifested in Enlightenment-inspired projects to create vast compendiums of knowledge, remains undiminished, even if we are committed to multiculturalism and diversity and are more cognizant of the genocidal policies that led to the extermination of entire tribes and their cultures.  How we can best be committed to such ecological survival of plurality without instrumentalizing humans, animals, or nature is an ethical question that may determine the course of the future.

5 thoughts on “*Eulogy for the Unsung: The Death of Bo and Boa Sr.”