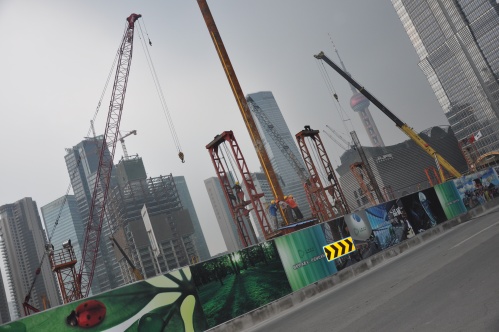 Shanghai and Beijing, it has been said, together account for 75 per cent of the world’s construction cranes. Shanghai alone, I have read somewhere, has something like 50 per cent of the world’s cranes. Perhaps the figures are exaggerated, even grossly so – but if they were, and Shanghai accounted for even a quarter of the world’s cranes, it would still be a remarkable factoid. Some will say that in the frenzy of getting Shanghai ready for Expo 2010, the Chinese authorities have swung into relentless action and many of the cranes will disappear after the Expo is over. First there were the Beijing Olympics, now there is anticipation of the Shanghai Expo. What will feed the adrenalin rush after this? What new achievement of the modern Chinese state remains to be promised to the Chinese people and to the world outside?

Beijing and Shanghai began to refurbish themselves long before their successful bids. China has been enthused with the idea of being ‘world class’ since at least the mid-1980s, and Shanghai is an attempt to showcase a ‘world class’ city without any equal. ‘World class’ is one of those terms has entered into the lexicon without our even being aware of it, and the race to be world class is now in full swing. I have seen all of India wrapped up in the same race. Indian cities are now awash with world class malls, even as the basic infrastructure that makes a city everywhere lies in complete shambles. The government has announced plans to launch world class universities, even as primary education lies in ruins and village schools have been allowed to go to seed. Delhi, Bangalore and Mumbai can now proudly claim dozens of world class hospitals – by my own count this last summer, Gurgaon, a satellite city of Delhi, had at least twenty hospitals, at least a handful of them world class – which have transformed India into a mecca of medical tourism, even if the vast majority of India’s own population is without access to basic medical care. In this scheme of things, countries such as India and China do not find it amiss that they are attentive to the rest of the world much before they allowing themselves to worry about the well being of their own people.

The modern world has given birth to many mantras, among them progress, growth, and development. World class is the newest entry in this grammar of despotism. In the name of development, common people could be sent to their graves: if a country had to make progress, and be admitted into the community of civilized nations, it was deemed necessary that some people be called to make the ultimate sacrifice. In its attempt to become world class, Shanghai has razed much of its past: to be sure, parts of the old city remain and, most likely, will not to be obliterated. No modern city can do without some relics of the past: not only do they draw in the tourists and allow the city to make claims to its heritage, they are a pressing reminder to the citizens of everything that has been left behind and the blessings of modern living. In Shanghai, even the word ‘excess’ seems to too tame to convey the enormity of what has been wrought since China adopted a course of economic reforms.

More than anything else, Shanghai can perhaps be termed construction city. The city is, it seems, home to more skyscrapers than any other place in the world, and good parts of the city might well be mistaken for a metropolis in the modern West. One of the city’s tourist brochures proudly declares that the main drag that runs through the French Concession, the Middle Huaihai Road, is comparable to New York’s Fifth Avenue, London’s Kensington High Street, and Paris’s Champs-Elysees. And yet the feeling of drastic incompletion persists, and not merely because the cranes are to be found everywhere. Is anything at all meant to endure? Is modern Shanghai built on the very idea of obsolescence, and if so, will it furnish the notion of world class with a new set of meanings?

6 thoughts on “*Construction City: Shanghai and the Race to be ‘World Class’”